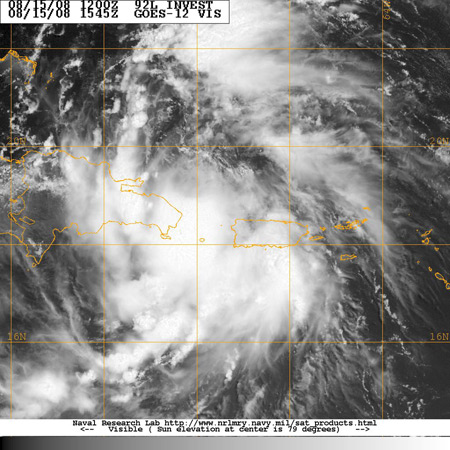 Tropical Storm Fay was a tropical storm and the sixth named storm of the 2008 Atlantic hurricane season. Fay formed from a vigorous tropical wave on August 15 over the Dominican Republic. It passed over the island of Hispaniola, into the Gulf of Gonâve, across the island of Cuba, and made landfall on the Florida Keys late in the afternoon of August 18 before veering into the Gulf of Mexico.

It again made landfall near Naples, Florida in the early hours of August 19 and progressed northeast through the Florida peninsula, emerging into the Atlantic Ocean near Melbourne on August 20. Extensive flooding took place in parts of Florida as a result of its slow movement. On August 21, it re-entered near Daytona Beach, moving due west across the Panhandle, crossing Gainesville and Panama City, Florida. As it zigzagged from water to land, it became the first storm in recorded history to make landfall in Florida four times. Thirty-six deaths have been blamed on Fay. Damage from Fay was quite extreme, but a specific cost of damage is unknown.

A tropical wave moved off the coast of Africa on August 7 without any significant convection, with an associated low pressure area moving southwestward away from the coast.It passed just south of the Cape Verde Islands, and tracked generally westward with a subtropical ridge centered to its north over the Azores. Late on August 9, an area of convection developed in association with the wave. With generally favorable conditions for development, the system began slowly organizing, to the extent that on August 10, the National Hurricane Center (NHC) remarked for its potential to become a tropical depression in a few days. By August 11, however, the thunderstorm activity became disorganized and limited, though the next day convection reformed by the time it was located about 650 mi (1050 km) east of the Lesser Antilles. The hurricane hunters first flew into the system on August 12, though the flight only reported a broad area of low pressure. After the hurricane hunters’ flight, the system became disorganized as environmental conditions became less favorable, and by late on August 13 the convection was limited and well-removed from the low center. The next day, thunderstorm activity increased and organized, though another hurricane hunters flight confirmed the system did not develop into a tropical cyclone. After passing over the northern Lesser Antilles, the system moved over the Virgin Islands and Puerto Rico, maintaining an area of deep convection. It became better defined as it moved through the Mona Passage, and a hurricane hunters flight confirmed the presence of a closed circulation. With flight level wind gusts of 56 mph (91 km/h) reported northeast of the center, the NHC initiated advisories on Tropical Storm Fay late on August 15 as the cyclone moved ashore along eastern Dominican Republic. Initially, it was forecast to steadily intensify before and after crossing Cuba, later reaching minimal hurricane status in the eastern Gulf of Mexico; the HWRF hurricane model predicted for Fay to become a strong hurricane off the coast of western Florida. Upon first becoming a tropical cyclone, Tropical Storm Fay was moving steadily westward over Hispaniola, influenced by a ridge to its north. At around 1200 UTC on August 16, the storm emerged into the Gulf of Gonâve, with little organized convection near the center. Environmental conditions favored strengthening, and convection quickly developed over the center. By early on August 17, a hurricane hunters flight reported a better organized circulation center, and satellite images displayed well-established outflow within a large convection envelope. After passing near or over southwestern Granma Province in Cuba, upper-level wind shear increased slightly, and the convection diminished near the center. The storm turned more to the northwest, due to a trough weakening the ridge to its north. Fay made four Florida landfalls, first at Key West in the late afternoon of August 18, then early the following morning at Cape Romano south of Naples as a 60 mph (96 km/h) tropical storm. Later that day, while crossing central Florida, Fay unexpectedly strengthened to 65 mph (106 km/h) over land with a pressure of 986 mb, which is a stronger intensity than Fay had ever obtained over open ocean. The storm developed an eye feature, and continued to hold its strength for the rest of the day. After many hours of land interaction, Fay began to weaken. Fay regained some strength, however, after leaving land at Melbourne and heading northward over the warm Atlantic Ocean waters, only to be deflected westward as it encountered a high pressure ridge. This resulted in another landfall at Flagler Beach in the afternoon of August 21. Fay then emerged into the northeastern Gulf of Mexico and made its fourth landfall on the morning of August 23 near Carrabelle in the Florida Panhandle. Fay narrowly missed making yet another landfall, the center staying barely onshore while passing Panama City and St. Andrews Bay.

Nonstop flights between Guatemala and the Dom. Rep. begin

Investments in new infrastructure will transform the country

Cabo Rojo port to disembark tourists by the end of 2023