The multilateral entity is considering doubling the credits to which the Dominican Republic has access from its capital.

External financing has been one of the main strategies of the Dominican Government to channel the liquidity it needs to carry out the development projects currently underway.

One of the multilateral entities that has played a key role in providing financial support and technical assistance to the Dominican Republic, in initiatives ranging from road infrastructure works to public-private partnership (PPP) projects, has been the Central American Bank for Economic Integration (CABEI).

Since the Dominican Republic became a member of CABEI in 2007 to date, more than US$1.164 billion has been facilitated through this organization and cooperation continues to increase. From January to September 2022, the bank has approved operations for US$450 million for the construction of line 2C of the Santo Domingo metro and the provision of liquidity for the temporary support program for the fuel crisis.

It also received a contracted amount of US$453,875 this year from the government for “Support in the design, structuring, and implementation of the first project under the public-private partnership scheme in the Dominican Republic,” as well as a total of US$6,944,625 in contingent and non-contingent donations.

In the next two years, the entity foresees credits for an additional US$130 million, of which US$100 million would go to the program for strengthening natural disaster risk reduction and US$30 million to equip the health system with more ambulances. 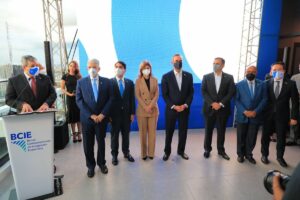 In a virtual interview granted to elDinero, the institution’s executive president Dante Mossi explained that over the years, the Dominican Republic has increased its shares in CABEI by almost 5%, or around US$900 million.

The relevance of the projects supported by CABEI -among which are also the Amber highway, the Pedernales tourism development project, the Montegrande dam and the railway line between Santo Domingo and Santiago-, as well as the good management that the country has had with its financial commitments -estimated at just over US$1.2 billion- contemplate the possibility of the organization increasing its line of credit to the country, up to US$1.8 billion.

“We want to double the quota to the Dominican Republic because we have very good prices and it has been a partner that has bet a lot on CABEI, so we feel committed to supporting the large-scale projects” that are currently underway, said Mossi.

Influenced by the global trend, CABEI’s interest rate-calculated from the SOFR reference rate plus 2%-is at 5.2%. However, the bank has resorted to a strategy of seeking support from co-financing countries that ease the economic burden on the organization’s member countries.

“For example, we are attending to the President’s (Luis Abinader) request for the purchase of ambulances, to reduce the time in which a person is taken, from home or from an accident, to the hospital. We went to South Korea to co-finance the operation and that lowered the cost of the loan to 3.5%. We are doing the same with the Amber highway, to lower the costs”, he pointed out.

Some of the works supported by CABEI show notable progress. This is the case of the Montegrande dam in Barahona, one of the most important water projects in the region, which could be ready “by the end of the year”, after 90% completion.

PPP projects, such as the Amber highway (for which CABEI earmarked around US$500 million) are awaiting the creation of a trust fund and are expected to be ready “by next year”.

Having overcome the worst economic repercussions of the pandemic and “even though market conditions are very difficult,” Dante Mossi maintains an optimistic outlook for the Dominican Republic.

“With the good risk rating we have, CABEI is going to continue working hard to be able to look in the capital markets for cheaper money,” he said. He is confident that many of the projects they are supporting are betting on the modernization of the nation and that, by 2023, many of them will be in the implementation phase.