“Development Dialogues” is a space to outline the route that the DR must take to face the great challenges.

The space “Development Dialogues”, inaugurated this Monday, October 3, by the Ministry of Economy, Planning and Development, constitutes an opportunity to achieve new consensus in society, with the purpose of facing the great challenges of the country and outlining the route that must be followed to convert economic growth into quality of life.

This was agreed by the Minister of Economy, Planning and Development, Pável Isa Contreras, moderator of the activity, and the former ministers of this entity, Miguel Ceara Hatton, Temístocles Montás, Isidoro Santana, and Juan Ariel Jiménez, panelists of the Development Dialogue.

“The Ministry of Economy, Planning and Development has created Development Dialogues, an interactive, transparent and close space, so that we can all reach a consensus on what development model we want for our country,” said the Minister of Economy.

Isa Contreras said that, like many other developing countries, the Dominican Republic faces simultaneous long-term challenges: Achieving a productive transformation for continued economic prosperity, achieving greater levels of equity to obtain more social and territorial cohesion, achieving more environmental sustainability and achieving greater resilience of the economy and communities in the face of the challenges of climate change.

However, said Minister Isa Contreras, moving in this direction in the current context and in the particular conditions of the Dominican Republic is truly challenging and there are at least five elements that must be taken into account.

In this regard, he cited the effects of climate change in a small island state, global industrial relocation, technological and digital transformation, global and regional conflict, as well as the crisis in Haiti. 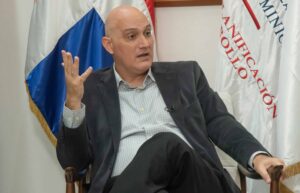 Former Minister Ceara Hatton said that the Development Dialogues are an opportunity to share different visions of the country’s development process and to understand what have been the factors, both of success and failure, which in the long term have caused the current situation and how they could be modified in the future.

Likewise, Montás, also former head of the Ministry of Economy, said that the Development Dialogues are an important instrument in the search for defining public policies and institutional, social, economic and environmental reforms that are fundamental for the country’s progress.

For his part, former Minister Santana indicated that normally the Ministers of Economy have to be focused on what is expected and try to straighten the path with due time, so he understands that the Development Dialogues help a lot in this aspect. He considered that these are important for the population due to the fact that the Dominican society has a very precarious economic culture.

For the former Minister Jiménez, the Development Dialogues are the type of spaces that allow to put at the center of the debate the problems of the Dominicans to see how to overcome “what we have and get to the Dominican Republic that we all want”.

Government officials, university authorities, representatives of public and private institutions, civil society organizations and the diplomatic corps accredited in the country will participate in the opening of the Development Dialogues.

About the Ministry of Economy, Planning and Development

The Ministry of Economy, Planning and Development has among its attributions and functions, to lead and coordinate the process of formulation, management, monitoring and evaluation of macroeconomic policies and sustainable development of the Dominican Republic.