Foreign Minister Roberto Álvarez assured on Wednesday that the Dominican Republic is attracting considerable international attention, thanks to the leadership of President Luis Abinader.

During his participation as guest speaker at the monthly luncheon organized by the American Chamber of Commerce of the Dominican Republic (AMCHAMDR), the Foreign Minister said that thanks to the democratic bond with which the President of the Republic took office, coupled with the synchronized work of this Government together with the private sector, has shown enormous resilience, creating a new image for the country in the world.

In this sense, he emphasized that the implementation of the current foreign policy has been decisive, contributing to the increase in exports and foreign investment.

The Foreign Minister also highlighted the progress made by the Alliance for Development in Democracy (ADD), made up of the Dominican Republic, Costa Rica, Panama and Ecuador, to jointly address issues in the areas of politics, cooperation, environment, trade and investment. This Alliance, he said, has had a close approach with the United States to strengthen and protect supply chains through a Memorandum of Understanding signed this year 2022.

“Right now the Alliance is working together with the U.S. Government and Congress to materialize the different legislative initiatives on nearshoring that are going through the U.S. Congress and to take advantage of the new commercial opportunities it opens up; for example, the semiconductor law and the inflation reduction law, recently passed in the United States. This is a great opportunity to catapult our exports and foreign direct investment as never before. We are visualizing opportunities beyond the horizon conceived in 2004 by DR-CAFTA. It must be clear that a determined commitment from the private sector is required to materialize the advantages offered by these initiatives,” said Alvarez. 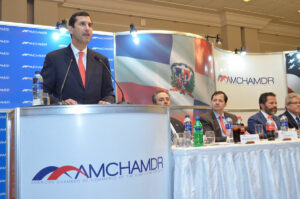 On the situation in Haiti

The Dominican diplomat explained that thanks to the intense diplomatic efforts of the Dominican government, the country managed to turn the international community’s attention to the Haitian crisis and the United Nations Security Council adopted Resolution 2645, which not only extended the term of the mandate of the United Nations Integrated Office in Haiti (BINUH), but also called for the creation of mechanisms to sanction the gangs that are increasingly taking control of the territory.

“Since Resolution 2645, the UN has begun to address the serious situation in Haiti, leading to the request of the Haitian government just 4 days ago, through which it asks its international partners to immediately deploy a specialized international armed force, in sufficient numbers to address the humanitarian crisis caused, among other reasons, by the insecurity resulting from the actions of armed gangs. This is not a United Nations peacekeeping force. The request calls for bilateral armed forces offered on a voluntary basis. The Haitians and the countries willing to support them have yet to determine the international legal framework and key operational aspects for the deployment of these forces,” said the diplomat.

He also pointed out that “the speed with which interested countries respond to the Haitian government’s request will be crucial for the evolution of events in Haiti”.

Summarizing his two-year term at the helm of the Ministry of Foreign Affairs, Roberto Alvarez recalled that the current Dominican foreign policy is focused on the attention of Dominicans abroad, the promotion of exports and foreign investment, and the promotion of democratic values and human rights, enshrined in the Dominican Constitution and international treaties. All this added to the process of professionalization of the Dominican foreign service and the transparency with which MIREX has been managed internally.

As a result of these guidelines, the Minister of Foreign Affairs pointed out that the Dominican Republic has seen its multilateral leadership grow, achieving positions in international and regional organizations such as the Vice-Presidency of the 76th General Assembly of the United Nations, President of the Permanent Council of the Organization of American States, Pro Tempore Presidency of the Central American Integration System, and among many others, the Pro Tempore Secretariat of the Ibero-American Conference; within the framework of the latter, the XXVIII Ibero-American Summit of Heads of State and Government will be held in the country in March 2023. He recalled that in the framework of the 52nd OAS General Assembly, the country was chosen to host the 10th Summit of the Americas, to be held in 2025.

The president of the AMCHAMDR, Roberto Herrera, indicated that another example of the confidence that the country has earned is the signing of a memorandum of understanding between the Ministry of Foreign Affairs and the Bureau of Customs and Border Protection (CBP) of the U.S. Department of Homeland Security, which initiates negotiations to include the Dominican Republic among the partner states of the “Global Entry” initiative, which will streamline entry procedures to U.S. territory and, consequently, promote business.

The luncheon held at the Ambassador Hotel was attended by ministers, vice ministers and directors of MIREX, other government officials, diplomats, AMCHAMDR directors, businessmen and media directors.