The Dominican Republic continues to be a leading nation not only in terms of economic growth on a regional scale, but also continues to consolidate the interest of new foreign investments in highly dynamic sectors such as tourism, mining, conventional and non-renewable energy, transportation infrastructure, free trade zones, financial sector, real estate and trade.

In 2021, foreign capital invested in the national territory passed US$3,102.10 million. This behavior shows the interest of investors in political, social and economic stability, in addition to the exchange rate and indicators of ease of doing business and reductions in bureaucracy and red tape in foreign trade. In January-March 2022, FDI reached US$1,028 million, according to data from ProDominicana.

These advantages have been the focal point for a country like the Dominican Republic, together with its geographical location that places it close to the US coast, to remain one of the largest recipients of FDI of all its peers members of the free trade agreement signed with the United States and Central America (DR-Cafta), such as Costa Rica, El Salvador, Nicaragua, Honduras and Guatemala.

Between 2016 and 2017, the Dominican Republic was the largest recipient of foreign investment from DR-Cafta members in the Central American region and the second largest in Latin America and the Caribbean, only surpassed by Panama. 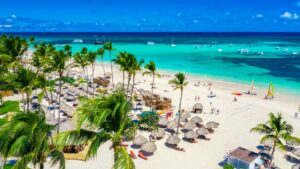 Indicators that investors observe are closely related to social peace, debt management, growth and competitiveness, among others. According to Datosmacro.com, the Dominican Republic’s Global Social Peace Index improved in 2021 with respect to the previous year, rising 1.99 points and ranking 81 out of 163 countries in the world, with respect to 2020. The Dominican Republic has also stood out in the region for its rapid recovery, despite the high global volatility, especially with food and commodity prices such as oil and its derivatives, given its high dependence on its productive structure. The Central Bank of the Dominican Republic indicates tourism as the main focus in the recovery of economic growth and international organizations have valued the social protection policies, which include monetary expansion programs and the achievements reached with the vaccination against the Covid-19 pandemic and the sanitary protocols applied.

The World Investment Report, published this year by the United Nations Conference on Trade and Development (Unctad) reveals that in 2021 foreign direct investment recovered to pre-pandemic levels, “reaching US$1.6 trillion, equivalent to 64% more than the exceptionally low level of 2020”. In the case of Latin America and the Caribbean, says Unctad, FDI increased by 56% to US$134 billion, reflecting rebound in most countries and decline in very few economies in this region.

In the region, seven dynamic sectors stand out, including tourism, for its impact on job creation; renewable energies, electromobility, digitalization, the health industry, the bioeconomy, and the circular economy. The DR maintains a high preponderance in investments in tourism and energy and is gradually entering electromobility, as part of its strategy to comply with the SDGs (Sustainable Development Goals), including the pursuit of carbon emissions reduction and its contribution to the fight against adverse effects of climate change.

Country risk firms also give a favorable view to foreign investment in this country. Moody’s Invester, Standard and Poor’s (S&P); Ficht Rating, and Global Ratings, show a stable rating in the country risk and non-investment grade rankings. The report of the Executive Secretariat of the Central American Monetary Council (SEMLA) publishes the firms’ stable (BB-) rankings in the second quarter of 2022.

The global competitiveness index, published by the World Economic Forum indicates that in 2019 Dominican Republic reached 78th place out of 141 countries. In 2018 it was at 82.

The Honduran bank projected US$700 million at the end of that year.

ECLAC data indicate that 82% of investments in Latin America came in the last decade from the United States and Europe.