The 27th edition of the La Mar de Músicas Festival, which was dedicated to the Dominican Republic and was held from July 15 to 23 this year in Cartagena, Murcia, Spain, concluded with a great reception from the Cartagena public. The festival included other artistic, literary and folkloric manifestations since the beginning of July. A total of eight Dominican musical groups participated for a total of 37 artists, the exhibition of seven Dominican films and five photographic exhibitions on the Dominican Republic. There were also five talks and recitals on Dominican literature.

In the section La Mar de Arte, three photographic exhibitions on the Dominican Republic were presented by the prestigious Cartagena photographer Juan Manuel Díaz Burgos: “Son”, “Fluye” and “Archivo Conrado” and the 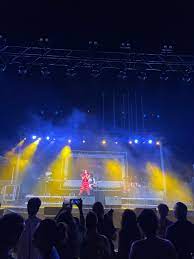 Friday, July 15 was the inauguration of La Mar de Músicas, with concerts by the queen of fusion Xiomara Fortuna and Vicente García, Dominican artists accompanied by a dozen musicians, several of them residents of Spain. That same day, Ambassador Juan Bolivar Diaz was received at the City Hall by the Mayor of Cartagena, Mrs. Noelia Arroyo, whom he thanked for the gesture of inviting the Dominican Republic to participate in such an important cultural festival. At the meeting they also discussed actions to further strengthen ties in favor of culture. At the end of the meeting, the ambassador was invited to sign the book of distinguished visitors.

On Sunday, July 17, the musical group MULA, composed of three artists from Santiago and singer Alex Ferreiras and two musicians, performed in the Plaza del Ayuntamiento before a large audience, followed by Dominican artists and their respective musical bands: Riccie Oriach, Sandro Reyes, Rita Indiana and Leton Pé; the latter concluded the festival.

The Dominican participation in this varied festival has been made possible thanks to the Ministry of Tourism of the Dominican Republic and the Spanish company Plus Ultra Airlines. La Mar de Músicas is considered one of the three most important music festivals in Europe. It has a reach of approximately 45,000 people and its media impact is valued at more than 6 million euros.

Cartagena is one of the oldest Spanish cities, founded by the Carthaginians more than two centuries before Christ, as a port on the Mediterranean Sea in southeastern Spain. With 214,000 inhabitants, it is a modern city with some twenty museums and exhibition halls, including the ancient Roman coliseum and the underwater archeology museum, the only one of its kind in Spain.