The Latin American Fashion Summit (LAFS) will be held in the Colonial City of the Dominican Republic in March 2023.

The Latin American Fashion Summit (LAFS), an annual summit that celebrates the fashion industry in the region, announced important details of the first edition of its Raíces by LAFS event, which will be held in the Colonial City of Santo Domingo, one of the most coveted tourist attractions in the region, which invites you to reconnect with the origin of Latin American culture.

During the press conference held at the Maraca restaurant, Samantha Tams, co-founder of LAFS, announced important information that will mark the development of the event this coming year within the framework of Design Week Dominican Republic, as part of the agenda of international activations that seek to boost the country’s orange economy.

With the support of the Ministry of Tourism, the first edition of Raíces by LAFS will be held from March 13 to 15, 2023. The event will be inaugurated with a grand welcome ceremony and, for three days, there will be panels led by industry eminences, workshops by distinguished professionals, a pop-up with a select curation of Latin American design and opportunities to connect with other professionals in the fashion industry.

Prominent personalities such as Karla Martinez de Salas, from Vogue Mexico & Latin America; Carmen Busquets, Donata Minelli, from Ulla Johnson; Lisa Smilor, from CDFA and Dominican model Arlenis Sosa, have confirmed their participation in this great event. Likewise, renowned buyers from stores such as Intermix, Harrods, Shopbop, Nordstrom and Maison Marché, as well as media such as Vogue USA, Forbes, WSJ and Elle USA, have also attended the event.

“Raíces by LAFS” aspires to go back to the roots of the project, to connect with the culture of the chosen destination, to give the LAFS community an excuse to get to know a new corner of Latin America, and to promote tourism in the region. And speaking of Raíces, for us it made all the sense in the world to hold the first Raíces in the cradle of America,” said Samantha Tams.

For her part, Rosanna Rivera, director of Tourism of the Colonial City, said, “We thank Samantha and Estefania for having selected the first city of the New World, the one that saw the birth on 123rd Street of our most universal and beloved ambassador, Oscar de la Renta.” 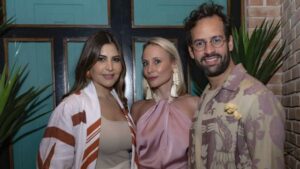 In 2018, LAFS began as an annual fashion conference with the mission to enrich Latin American talent through inspiring panels and workshops conducted by global industry leaders, with whom they also had the opportunity to connect to grow their businesses. The first edition was held in the magical Riviera Maya and the second in Cartagena de Indias with the objective of bringing the regional industry together once a year and bringing international industry eminences to Latin America, promoting talent, tourism and generating job opportunities in various cities in the region.

After a virtual conference in pandemic in March last year, LAFS held its most important edition so far in Miami, where Pharrell Williams, Lauren Santo Domingo and Aerin Lauder were some of the distinguished names that collaborated to take this event to the next level.

Following the significant growth of the platform, its creators, renowned entrepreneurs Estefania Lacayo and Samantha Tams, decided to hold the Latin American Fashion Summit twice a year, once in Miami and the other in a new Latin American city under the name “Raíces by LAFS”.

While in Miami (the new LAFS base), the event will give more prominence to inspirational panels and content of global interest to the fashion industry. The events in Latin America will be more focused on generating networking opportunities for Latin American entrepreneurs, especially between brands and buyers.

The pop-up will become even more important in this event, to allow more regional designers to market their products closer to home. This project will boost the country’s brand and support the Dominican Republic in its support of the orange economy.

For more information about the Latin American Fashion Summit and to purchase tickets to participate in this great meeting of Latin American fashion, please visit www.latamfashionsummit.com.

Latin American Fashion Summit is a platform created by renowned entrepreneurs Estefanía Lacayo and Samantha Tams with the mission to elevate and enrich the Latin American fashion industry and make it more relevant.