Spanish hotel chains in the Dominican Republic, grouped in Inverotel, announced an investment of one billion dollars for the next two years, after affirming that the country has the best president and minister of Tourism.

Iverotel recognized this Thursday, the work of the Dominican Tourism Cabinet in the recovery of tourism and the record achievements that the sector has had in the year 2022, during an event held in Santo Domingo attended by the President of the Republic, Luis Abinader and the Minister of Tourism, David Collado.

At the event, the President of the Republic was recognized for the outstanding work of the Cabinet of Tourism, which he presides and which was attended by other authorities and tourism entrepreneurs and other sectors of the national economy, took place within the framework of a working meeting that, for the second consecutive year, several of the members of Inverotel have held with the President of the nation and the Dominican Minister of Tourism.

President Luis Abinader thanked the Spanish investors for believing in the country and investing in it, while affirming that investment in Quisqueya is safe and that they can continue to do so with confidence, because in this way the Dominican Republic progresses, makes greater investments and generates more jobs.

David Collado said that yesterday 17,979 foreigners arrived in the country, 66% through Punta Cana, 22% through Las Americas and 9% through Santiago, coming from 76 countries, led by the United States, with 24% of adventurous tourists and 75% are staying in hotels.

He reiterated that this month of November is projected to have a growth of approximately 35% to 40%, reaching up to today, 424,322 foreigners and the projection at the end of the month is 589,000 tourists. 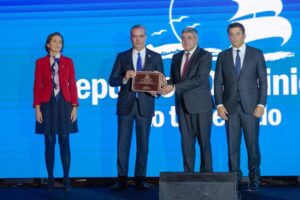 Businessman Miguel Fluxá, president of Iberostar, highlighted the work being done by President Luis Abinader and Minister David Collado to strengthen the development of tourism and to make the Dominican Republic the first country in the world to achieve the recovery of the sector.

Encarna Piñero, president of Inverotel and general manager of Grupo Piñero, affirmed that the Dominican Republic has reason to celebrate, given the results that the tourism sector is obtaining in terms of visitor arrivals, which could reach 7.2 million by the end of 2022. A large part of them will have stayed in the hotels that 16 of the 17 companies that are part of Inverotel have in the country and that, in total, represent 45% of the availability of hotel rooms in the Dominican Republic.

He highlighted two concrete actions in the growth of Dominican tourism. On the one hand, the proactivity of the minister in his outings to the tourist issuing markets to promote the country and another factor is that the Dominican Republic is the only country in the world that has a public-private marketing committee that has allowed to be more efficient and successful with the use of resources for the positioning of the destination.

The president of Inverotel insisted on the need to continue the united work between authorities and the private sector. We are living a great moment in the history of Dominican tourism and we want it to last, prosper and grow,” she said.

The event was closed with a private lunch offered by the President in the Colonial City. Inverotel members Carmen Ríu, Miguel Fluxá, Encarna Piñero, André Girandeau, Javier Luque and Juan Fierro participated in the event and reviewed the agenda of issues on which they have been working since the inauguration of the current president with the aim of improving the performance of tourism as an economic engine of the country.