The French ambassador to the Dominican Republic highlighted the contributions and economic impulses made by France to the country through financing and consultancy for development projects.

Mr. Eric Founier highlighted these projects such as the Cable Car of Los Alcarrizos, Metro de Santiago and some agro-forestry projects in the mountains of Santiago.

Interviewed by the communicator Robert Gonzalez in the program Tele Diario which is transmitted daily on channel 16, the ambassador Eric Founier was fascinated by the ecotourism potentials of the South and East region of the country.

Week of the French Law and Justice

The diplomat also highlighted that the French Embassy in the Dominican Republic and the National School of the Judiciary (ENJ) are organizing the Week of French Law and Justice, an event to be held from November 14 to 17 of this year in Santo Domingo. Nine French legal experts will participate in the planned activities.

The objective of this event is to promote the dialogue between France and the Dominican Republic, as well as to update some legal topics of interest for this country. In this context, topics as diverse as Transparency in the Public Function, by Patrick Matet, eminent member of the French Commission on Transparency in Public Life and honorary dean of the French Court of Cassation; The Digitalization of Justice; and Policies on Human Trafficking and Sexual Exploitation will be discussed.

The experts, who come from the universities of Paris Panthéon-Assas, Paris Dauphine and Clermont Auvergne, will also speak on civil and commercial law at five Dominican universities (UASD, UNAPEC, UNIBE, UNPHU and PUCMM) and will give lectures and specialized workshops for judges at the National School of the Judiciary and the Supreme Court of Justice. 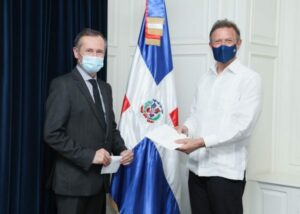 Parallel to these academic activities, legislators of the Justice Commission of the Chamber of Deputies, will join the French Law and Justice Week to organize a day of work with two French experts of the Henri Capitant Association, with whom they had already met in Paris in June to exchange ideas on the reform of the Dominican Civil Code. The expert of the French Court of Cassation will have, for his part, an approach with his Dominican counterparts and with the president of the Supreme Court of Justice, magistrate Luis Henry Molina.

Within the framework of this event, a cooperation agreement will also be signed between the Dominican ENJ and its French counterpart, the National School of the Magistracy (ENM). The purpose of this agreement is to allow exchanges between the two schools so that aspiring judges can carry out internships in both countries.

It should be noted that the program of the Week of French Law and Justice reaffirms the unique link and transcendental influence that French law has had and continues to have on Dominican law.

This activity is supported by the Henri Capitant Association, the International Institute of French Law of Expression and Inspiration (IDEF) and the French-Dominican Chamber of Commerce and Industry; as well as with the collaboration of the Dominican Association of Graduates in France (ADDEF), the Global Foundation for Democracy and Development (FUNGLODE) and the universities UASD, UNAPEC, PUCMM, UNIBE and UNPHU.