The future seems uncertain at a global level, but the steps and strategies of governments and world political leaders continue to be interested in reversing this negativity.

The Vice President of the Republic, Raquel Peña, demonstrated to the world the achievements of the Dominican government in the economy and tourism obtained, obtained in the midst of the scourge of the multiple crises that have been plaguing humanity since the end of 2019.

And he did so at the annual meeting of the World Economic Forum that ended last Friday in Davos, Switzerland, where more than 50 heads of state and government, the top leaders of the UN, the IMF, the World Trade Organization (WTO) and world business leaders were present.

Participating in the panel on “Leadership for Latin America”, Peña highlighted the way in which President Luis Abinader turned the Dominican Republic into a global example to follow.

The Dominican Republic, ranked by international organizations as the seventh largest economy in Latin America, was one of the first countries to recover the tourism industry and stabilize its economy post pandemic, managing to close 2022 with a 5.5% growth rate.

The Vice President explained in her speech that part of the strategy applied by the government in the face of last year’s crisis was to support entrepreneurs to start new businesses, improve the skills of the population to strengthen economic growth, and make it more competitive to gain access to new markets.

It is time to implement short and medium-term solutions to prevent the explosion of the social pressure cooker that is spreading throughout humanity, destabilizing governments and causing the disappearance of business and commercial institutions.

The pandemic and the Russian-Ukrainian war continue to affect the world’s energy, food and supply chain markets.

The five most significant global risks that could appear in the next two years affecting the global economy are, according to experts: cost-of-living crisis, natural disasters, geopolitical confrontation, failure to mitigate climate change, and the erosion of social cohesion and polarization.

For world leaders, the short-term risk landscape is dominated by energy, food, debt and natural disasters due to climate change. 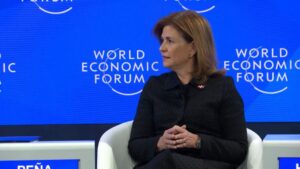 At the “Davos Forum” they identified the cement and concrete, iron and steel, oil and gas, chemicals and coal mining industries as responsible for 80% of industrial emissions. They also showed concern about cybersecurity.

The remote work that arose from the Covid-19 pandemic increased the number of cyber attacks by “jackers”, forcing this problem to be one of the priorities of organizations and nations.

The future seems uncertain at a global level, but the steps and strategies of governments and world political leaders are still interested in reversing this negativity by betting on greater capital investment, agricultural production, decarbonization of industries to mitigate the negative impact of climate change and increase employment.

World leaders and their respective governments, responsible for guiding the planet towards a better destiny, know what needs to be done to prevent these bad omens from dissipating for the good of humanity.

In the midst of this panorama, the World Bank predicted that the Dominican Republic will maintain a solid economic growth close to 5% for this 2023 and 2024, due to the interest that the Abinader government has put in terms of capital investments.

And the Food and Agriculture Organization of the United Nations (FAO) stated that the Caribbean nation is one of the two in Latin America that have significantly improved the nutrition of their populations.

Receiving more than eight million tourists in 2022 in the midst of multiple global crises is an unquestionable triumph of the Dominican government.

When it comes to economic and tourism achievements, the Dominican Republic is the example to follow.

The results and numbers speak for themselves; the political and business leaders who participated in the World Economic Forum are aware of this, but so are the leaders of the opposition parties in the Dominican Republic.