David Collado highlights the participation of more than 50 tourism companies in the Dominican Republic’s participation in the fair.

With the presence of King Felipe VI of Spain and his wife Letizia, Tourism Minister David Collado kicked off the Dominican Republic’s participation in the International Tourism Fair (FITUR 2023), which is being held in this city until the 22nd of this month.

“You can come to the Dominican Republic with a Rolex or a Casio,” said Collado in reference to Shakira’s latest song and the fact that the country has everything for everyone.

With a stand that stands out as the most attractive in the Pavilion of the Caribbean and Central American countries, the Dominican Republic has a presence along with more than 50 companies linked to the national tourism sector.

What attracted the most attention was a space dedicated to an immersive experience of the Dominican Republic, where people can have a three-dimensional experience, entering the majestic beaches of the country, as well as the other tourist attractions of the island and an approach to the work of Dominican artist Ivan Tovar.

Minister Collado inaugurated the Dominican Republic stand accompanied by the president of Banco Popular, Cristopher Paniagua, and the administrator of Banco del Reservas, Samuel Pereyra, who both gave speeches in which they emphasized the importance of healthy competition in coordination to contribute to the development of tourism and the national economy. 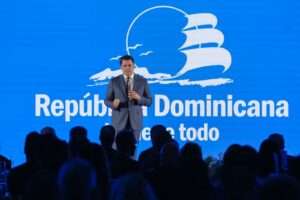 “Our goal is for the Dominican Republic to continue to be the reference in tourism for the continent, that is why we will continue to innovate and we will exhaust an agenda of more than 60 meetings this week where we will close agreements with airlines, new hotels and tourism investments, as well as tour operators, so that we can continue to promote the arrival of tourists to our country,” said Collado during the opening of the stand at Fitur.

The Dominican stand has the presence of more than 52 companies from the tourism sector, as well as cultural spaces and craft exhibitions, and also the presence of national products such as coffee, tobacco, chocolate and rum.

Among those present at the opening of the stand were Gabriel Escarrer, from Grupo Melía; Encarna Piñeiro, from Imberhotel; Frank Rainieri and Haydee Kuret de Rainieri, from Grupo Punta Cana; Adriana Cisneros, from Grupo Cisneros. Also Juan Vicini, Héctor José Rizek, Carlos José Martí, among others.