The Dominican Republic will host the 118th session of the UNWTO Executive Council in the first four months of 2023.

The Secretary General of the United Nations World Tourism Organization (UNWTO) Zurab Pololikashvili, congratulated the country for breaking the record with the arrival of tourists this summer, strengthening its solid leadership in tourism.

He also announced that the Dominican Republic will host the one hundred and eighteenth meeting of the UNWTO Executive Council in the first four months of 2023.

“Congratulations to the Dominican Republic for showing that tourism can face great challenges and continue to grow. Your destinations welcomed a record number of arrivals in July. That means more revenue for development and opportunities,” the secretary said on his Twitter account. 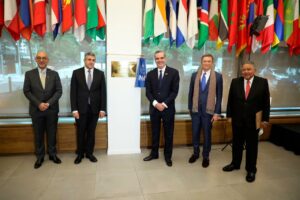 Pololikashvili noted that with the return of international travel in many parts of the world, several of its member countries such as the Dominican Republic have begun to post good numbers in both arrivals and tourism spending.

“All despite the fact that the sector continues to face a number of challenges, including the pandemic, rising interest rates and cost of living, as well as increased economic and geopolitical uncertainty,” Pololikashvili.

The Secretary said that the Minister of Tourism, David Collado, informed them of record arrivals in April, May, June and July. In particular, arrivals in July grew by 24% compared to 2019.

“If this trend continues, the country would record its best year ever, including in terms of taxes collected from sales and revenue generation. UNWTO has extended its congratulations to the minister for these data, in addition to praising the strong and continued support for tourism from the Dominican Republic,” Pololikashvili maintains.

The UNWTO secretary also highlighted the contribution made by the Dominican Association of Hotels and Tourism (Asonahores).

He said that this guide, developed together with the Ministry of Tourism and the National Center for Export and Investment (Prodominicana), provides key information for investors, with the aim of boosting foreign direct investment in the Caribbean destination.