Tourism has always been one of the most important commercial activities for the sustainable development of the Dominican Republic, and has turned the territory into a regional reference for its diversity of offerings.

Ecotourism, emerging in the country, has given people and communities the opportunity to belong to a sector that was previously privileged. It is a different kind of tourism that helps to grow through experiences in communion with nature. For sustainable community tourism, rivers are the main subject.

The rivers of the Dominican Republic, from the most impressive to the most curious, are the subject that Domingo Marte meticulously develops in the book “Ríos dominicanos. Redes de vida”, and ecotourism is the subject of the third episode of the documentary series that complements it, called “Redes de Vida”.

Both the book and the documentary series are sponsored and have been published by Banco Popular Dominicano, in the month of December 2022, as a continuation of its editorial series on various aspects of the cultural, social, ecological and economic life of the Dominican Republic. The book corresponding to 2022 was on the orange economy, of which we also published several summaries.

Throughout the short documentaries we travel through the main watersheds of the country, meeting people and possibilities. The third episode deals with the opportunities of ecotourism and water sports in rivers of the national geography, and the importance of positioning the country in terms of sustainable and community-based tourism. This adventure takes place on the Jamao River, in the Yásica River watershed, with the guidance of Nicolás Bera, co-founder of Nateevos, a digital platform that brokers experiences, stays and events around the Dominican Republic, involving communities.

At approximately 837 square kilometers, the Yásica River watershed is the largest of all the watersheds in the Atlantic water system. Ninety-eight percent of its area is in the northern province of Puerto Plata, and the rest in the province of Santiago. The Yásica River is 81 kilometers long and has an average monthly flow of 26 cubic meters per second (measured at Los Brazos). It rises in Las Yayitas hill, 940 meters above sea level, and near the town of the same name located in the Municipal District of Pedro García, province of Santiago.

The basin is located in a zone of high rainfall, with a minimum of 1,800 and a maximum of 2,600 millimeters. This condition, together with the mountainous relief of a large part of its territory, more or less reforested, and, in addition, the karstic nature of the land, have led to the existence of a large number of rivers, streams and creeks that make the basin the largest producer of water in the Northern Cordillera. The above conditions have also produced a large number of spas, pools and streams, many of them with turquoise waters that place the basin in the competition for the first place of natural freshwater tourism in the country. 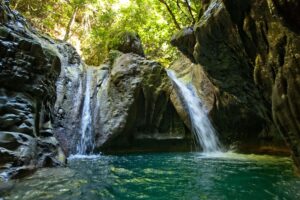 The mouths of the Yásica River at its three mouths are home to a rich fauna and are areas of active fishing. Windsurfing is practiced in one of them.

The main tributary of the Yásica River is the Jamao River, whose source is located in areas of cattle ranching and cocoa. This river, because of the color of its waters, could very well be called the Blue Jamao, in fact, bluer than the famous Danube in many of its stretches.

Jamao al Norte is internationally recognized because it has a sustainable tourism that involves the community.

Many of the visits to Jamao’s tourist sites are organized by Jamao Ecotours. The coexistence between the locality and the company is consolidated as an example for sustainable tourism.

Jamao integrates the communities into its business plan. Since the residents realized that people from inside and outside the country were visiting their resources, they organized themselves and began to create infrastructure.

Jairo Morillo, manager of Jamao Ecotours, explains that all the excursions have services offered by people from the community: the guide, transportation and food.

In a year these activities can generate between RD$10 and RD$12 million. The association, together with other agencies, develops several activities of sustainable community tourism, already awarded in one of the editions of the International Tourism Fair (FITUR), held in Spain.

The need for development through tourism in the province was consolidated in the ProEspaillat Cluster. Alberto Martínez, a member of the cluster, says that there are 9 communities involved in Jamao al Norte alone.

Between the third episode of “Redes de vida” and the book, water spaces that serve for the enjoyment of the population are presented. These are: