The palmchat, the “Cigua Palmera” in Spanish, is the national bird of Dominican Republic, and its scientific name is “Dulus dominicus”.

This family is endemic of La Hispaniola, and there is only one member. The Cigua Palmera lives in any environment but prefers settling in the palm plantations. There are many of these on the Saona Island.
Description

The Palmchat is mostly small. Its plumage is gray and black, and, sometimes, we find olive-green in it. It is more or less 20 cm wingspan, its beak is resistant and yellow. It has long fingers.

It’s pretty easy and usual to see a Cigua Palmera, since it lives almost in all the island, but we can find it more easily on the top of palm trees.

The Palmchat is a singer bird, joyful and noisy that only exists on the island of La Hispaniola. By hazard, these birds are numerous, thanks to their ability of adaptation to their habitat and their faculty to reproduce and feed themselves.
Feeding and breeding

This bird lives in group. It reproduce itself in a large nest that has internal separation as rooms in a house. It feeds itself with small fruits, flowers and insects as earthworms it catches flying.
Habitat

The Palmchats live in family, and the nest has many compartments and internal passages that transforms it in an very interesting natural architecture example.

In the country, it lives everywhere, but mostly where there are palm trees. It doesn’t live in high mountains and doesn’t like living in very dense forests. We can find it in the cities, next to the green spaces. 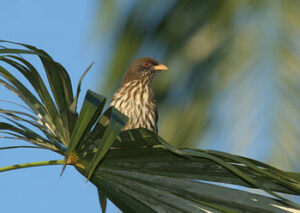 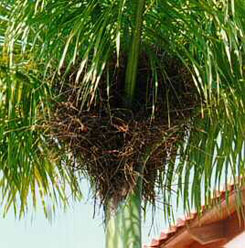 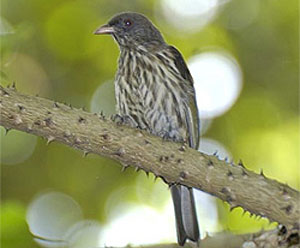