Improving appearance, boosting the immune system’s defenses and eliminating a wide variety of toxins from the body are some of the reasons why more and more travelers around the world decide to leave behind the traditional options of fun and lodging to opt for thermal tourism alternatives.

The Dominican Republic has the largest deposits of thermal waters in the Antilles and, despite its potential for the national tourism industry, most of these resources have not been sufficiently exploited.

Bolivar Troncoso, general coordinator of the Hotel and Tourism career of the Dominican University O&M, explained to Acento that the adaptation for tourism purposes of the hot springs that exist in the Dominican territory could represent an important adhesion for this economic activity.

“As an expert in geography, tectonism and ecotourism, I consider that the country is losing time, money and a great potential for the development of thermal water tourism, which is one of the most expensive in the world,” he said.

The latest Study and Diagnosis of Health and Wellness Tourism in the Dominican Republic, published in 2018, indicates that the nation has great potential for the development of medical tourism through the use of thermal waters.

“It is conducive to the creation of tourism products, such as hotel complexes with a wellness approach associated with thermalism, as an opportunity to position itself in the market and diversify the country’s tourism offer,” the text indicates.

An undergraduate research carried out by students of the Faculty of Health Sciences of the Pedro Henríquez Ureña University (Unphu), agrees with the above statement.

“A possible alternative for the prevention of diseases in the Dominican population are the thermal waters, which contain in greater or lesser quantity fundamental elements for health such as calcium, iron, magnesium, potassium, silicon and carbon, as well as trace elements such as aluminum, barium, nickel and zinc, among others, which would also strengthen health tourism and the economic and social development of the communities where they are located”, says the research.

The thermal waters of the Dominican Republic are located in fault zones or geological fissures. Among the best known places are: Aguas Calientes, in San José de Las Matas; Canoa, in Barahona; La Tina, in Guayabal; the Aguas Calientes, in Constanza and the sulfurous waters of Galindo, in Azua.

In many places, thermal waters converge with other tourist attractions such as rivers and springs.

In spite of the high density of recommendations that have been made to introduce the hot springs within the tourist offer of Quisqueyana, in a tour made by this media it was verified that, in most cases, the thermal waters are only for community use and, those that are more adequate, receive more national visitors than foreigners. 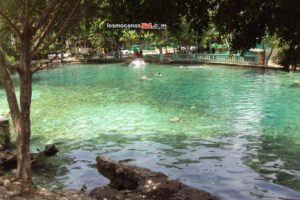 Are there any tourism development projects of thermal waters in the country?

Throughout Dominican history there has only been one tourism development project related to thermal waters. It is about an initiative, not materialized, that tried to turn the thermal waters of Canoa into a resort.

On August 6, 2007, the Dominican State signed a contract with the company 6 by the Italian engineer Roberto Chetoni, in which it was established that in a period of less than 10 years a hotel complex with a philosophy of rest and relaxation would be built.

The agreement indicated that the tourist center would have a global investment of 1,500 million dollars and would be developed within parcel 695 of the Municipal District of Canoa, with the intention of taking advantage of the thermal waters.

Some of the specifications of the agreement were that the lease protocol would be for a period of 99 years and the farmers of the area would be given US$350,000 as economic compensation.

The contract was to be studied by the Senate of the Republic in 2008, but the reasons why the project perished are unknown. Termas de la Salamandra SRL began operations in 2006 and closed on March 17, 2016.

Thermalism has generated important advances in the health and wellness tourism industry in dozens of nations around the planet. In countries with abundant thermal reserves, this sector has come to represent up to 50% of tourism consumption.

Worldwide, this activity represents one of the fastest growing groups within medical tourism. Only in 50 years, the revenues from thermalism went from two billion dollars in 1950 to 400 billion in the year 2000. This represents a growth of more than 200%.

As a nearby example, the Coamo thermal pool complex in southeastern Puerto Rico registers an annual average of more than 100,000 visitors.

According to studies on the geothermal potential of the country, in at least 15 thermal springs ecotourism projects can be developed.

It is necessary to emphasize that when promoting the thermal tourism in national territory, with a sustainable approach and based on the international parameters, it is possible to stimulate the local employment and the economic development of the localities in which they are located around the hot springs.

“What made me fall in love with Aguas calientes”.

“A natural beauty, full of wonderful people and with an incredible tourism potential”, are some of the words with which Alejandro Martínez, a local resident, defines Aguas Calientes Park in San José de las Matas (Sajoma).

Aguas Calientes is a thermal park located in the municipality of San José de las Matas.

Martínez, better known as Alex by the locals, came to this tourist attraction from Santo Domingo 11 years ago and says that since he first visited the site, he could not resist the temptation to stay permanently. In addition to the natural beauty, he emphasizes that the tranquility and security of Aguas Calientes is incomparable.

“I would like the tourist who comes here to see what I saw, and that is the nature itself, the tranquility and the lack of pollution. I think that what characterizes the Aguas Calientes project is its combination with nature,” he said.

This man is currently working in a Creole food restaurant located inside the thermal pools complex and agrees that this peculiar work of nature could be used much more from the point of view of tourism.

“In a certain way the tourism authorities here have not influenced as they should or as they have done in places like Bahía de las águilas or Jarabacoa. This territory is still virgin,” he said.
According to Martínez’s estimates, Aguas Calientes receives an average of 50 visitors daily, however, most of them are Dominicans, with a high proliferation of Sanjosematenses.

Deterioration of the hot springs of Canoa

The thermal waters of Canoa, located in the southwest of the country, are among the best known in the nation, for their particular blue color and properties for the treatment of skin diseases and rheumatism.

During Acento’s visit to this place, it was possible to verify that in one of the hot springs the water depth levels were below those registered only a year ago.

José Luis Jiménez, a frequent visitor to the area, said that over the years he has seen how the creek has dried up little by little. The young man added that he fondly remembers the times he used to spend with his family and friends in the place, but that the current state of the waters has prevented him from enjoying the space as he did in the past.

“Before it was bigger and had more water, with time it has been drying up… When we came we did it in groups, we spent the whole day and shared with our family and friends,” he said.
Likewise, Jiménez considers that Canoa’s thermal waters represent a very valuable resource that could be exploited much more from the tourism and commercial point of view.

On the other hand, at the entrance to the hot springs there was a dump full of waste of different categories; among the most common were glass bottles and plastics.

Although there was little garbage in the bathing area, there were some remains of plastic wrappers and cups near the hot springs.

The Dominican Republic has developed one of the most solid tourism industries in the region and this has been the result of the efforts of different institutions that seek to expose the best of this land.

The natural wealth of the country has been crucial to maintain the macroeconomic stability of the whole nation and with the thermal tourism, there is a wide variety of possibilities that can strengthen the development of the local tourism. In words of the expert in tourism Bolívar Troncoso, “with the thermal waters that we have, we have a great tourist potential that has not been exploited”.