Macadamia nut is a nut produced by a flowering plant of the same name. It can also be called macadamia nut bush, nut or Queensland nut maroochi.
Description

Macadamia nut is fairly dry and is covered with a thick skin very hard, under which is the fruit.The seed has high oil content and is a globose drupe fruit to 3 cm in diameter. It is edible.

It is the most modern of nuts, and that was not discovered until the mid-nineteenth century by the botanist von Müller. The name is in honor of naturalist and Australian politicians, of Scottish descent, John Macadam.

TreeThe Macadamia is a genus contains eight species of flowering plants of the family Proteaceae. Their range was limited to eastern Australia (seven species) and Indonesia (Sulawesi, one species, “M. hildebrandii”).

Currently, the macadamia is grown in Bolivia, Costa Rica, Guatemala and Dominican Republic.
Only two species of the eight species of flowering plants of the genus Macadamiahave an edible nut: “Macadamia integrifolia” and “Macadamia tetraphylla”.
Properties

The oil extracted from macadamia nut contains 80% of monounsaturated fatty acids. The macadamia contains palmitic acid (C16: 1), omega 6 and omega 3 essential fatty acids important and healthy. Currently, the macadamia is used for the production of cosmetic products, as their attributes also contribute to skin hydration.

Is included in many products recommended for dry skin, such as facial moisturisers and body moisturising cream.

It is also rich in anti-inflammatory substances as recommended for sensitive skin, and is an excellent ingredient found in products for mature skin, due to its high moisturizing, nourishing and anti-wrinkle.This nut is rich in heart-healthy fat, so it is advisable in diets for lowering cholesterol. 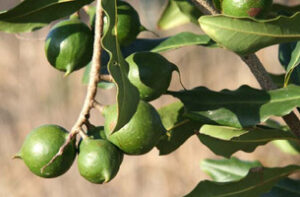 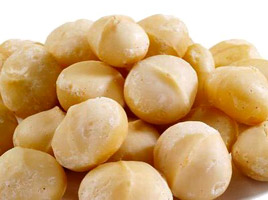 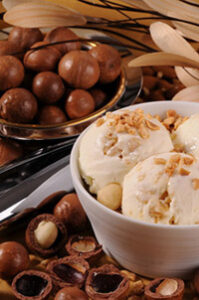 Macadamia nut is used for food and eaten raw, roasted and salted.
In the culinary environment, macadamia nuts are considered gourmet touch and creamy texture. They are used to give an exotic touch to the dishes of vegetables, rice and salads either whole or chopped.

Its use also extends into making desserts like cakes and famous Macadamia ice creams.