This day was established in 1963, under a decree of the then President of the Republic, Rafael Bonnelly.

Every November 7, the Dominican Republic celebrates the National Sports Day. Countries around the world have embraced sports as a practice or discipline that allows the physical, mental and healthy development of the individual, which is why it was a common practice in ancient civilizations.

This day was established in 1963, under a decree of the then President of the Republic, Rafael Bonnelly, who was later succeeded by Professor Juan Bosch. Every year the Ministry of Sports organizes several sporting events at the national level to commemorate the date.

Sports in the Dominican Republic

Baseball, or pelota as most Dominicans are accustomed to call it, is the most practiced sport in the Dominican Republic, which is why it is called the “national sport”. Due to the climatic conditions of the country, it is played throughout the year at the amateur level, but the official season for professional teams is during the fall-winter (from October to February) since this is the time when professional players can participate at the local level. The country has excellent major league players and immortals such as Juan Marichal and Pedro Martinez.

But sports such as volleyball, basketball, soccer, swimming, softball, athletics, etc. are also practiced. For years, volleyball was the second most practiced sport at the national level because it could be practiced in very simple facilities. For this reason, the first international successes, apart from baseball, were achieved in this discipline, mainly by the women’s national team. 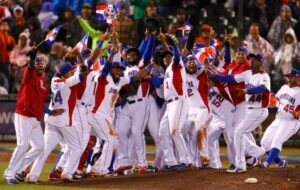 As sports facilities increased in the country, especially in the big cities, other sports were developed and some have reached a level of quality in international scenarios, as is the case of basketball.

In the Dominican Republic, as in other countries of our continent, it was the Europeans who brought soccer to the island. Although the level of soccer played in the country is still not comparable to that of other countries in the region, it has slowly been improving and there are already Dominican players playing in leagues in other countries. The incorporation of players descendants of emigrants, mainly from Spain, has slightly increased the level of the national team.

The origin of athletics in the Dominican Republic dates back to 1946, when the country participated in the V Central American and Caribbean Games, held in Barranquilla, Colombia. The National Athletics Federation was created on March 21, 1953, with the objective of participating in the VII Central American and Caribbean Games, to be held in Mexico the following year.

Soccer is one of the fastest growing sports disciplines in the Dominican Republic in recent years, so much so that the most renowned sports commentators place this sport among the 5 most practiced sports activities in the national territory. Its practice varies by province, not having a great acceptance of relevance in the cities of greater political importance and a progressive acceptance in provinces such as Puerto Plata and Peravia.