The Caribbean country has closed 2022 with the best data in its history in terms of international tourist arrivals, thus 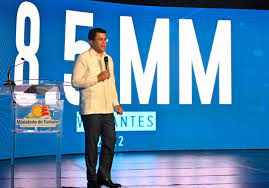 consolidating the recovery of the sector after the pandemic. The government had set out to surpass the 2019 figures, which it achieved months ago, so it set a new goal: to surpass the 7 million barrier and it has achieved it.

Specifically, 7,165,387 international tourists arrived in the Dominican Republic by air during 2022, according to figures presented by David Collado, Minister of Tourism. Collado has also highlighted that December was the best month in the history of Dominican tourism, surpassing for the first time the three quarters of a million mark, with 765,910.

But air arrivals are not the only record broken by Dominican Republic tourism in 2022. The number of cruise passengers also surpassed other years, with a total of 1,311,129 passengers.

“We grew by 10% over 2019 in terms of tourist arrivals by air and grew by 20% in terms of cruise visitor arrivals over that year, so we reached an unprecedented total of 8.47 million visitors to the Dominican Republic in 2022,” Collado celebrated.

As for the main markets, Collado detailed that the United States and Canada -which regained its place after the harsh travel restrictions imposed by Covid- are in first and second position, respectively, followed by Colombia, Argentina and Germany.

However, all these tourists are not equally distributed among all Dominican tourist destinations, as it was Punta Cana Airport that starred in air arrivals in 2022, surpassing 4 million passengers. Likewise, the hotels with the highest occupancy rates have also been those in the Punta Cana Bávaro area, which, for example, reached 79% in December.