Pepillo Salcedo, popularly called Manzanillo, is a municipality of Montecristi where the border with the Republic of Haiti begins.

This destination, located 300 kilometers from Santo Domingo, has more than one reason to become an important tourist spot for the region: it has one of the best bays in the Dominican Republic, part of the largest mangrove area in the country and the mouth of the Masacre River. It also has attractive beaches and a town steeped in history.

Ecotourism is practiced in the city, thanks to its beaches Los Coquitos and Estero Balsa, although these activities are only appreciated by residents and visitors from neighboring areas.

According to the Association of Shipping Companies of the Dominican Republic, the Port of Manzanillo, located in the Bay of Montecristi, is the deepest port in the country.

It was built in the 1940s and began operations in May 1946 with the first shipment of bananas and other small fruits aboard the small ships Jamaroy and Christiane.

The port, which has more than 220 meters of dock, is used for unloading clinker (raw material for cement manufacture), and from here guineos are exported, mainly to Europe and England, as well as melons, lemons, bananas, mangoes, and dried coconuts.

In addition, sand and gravel are exported, mainly to Providenciales, the Turks and Caicos Islands, Saint Thomas and Martinique.

This port has a promising future because export costs are reduced due to its location in the northwest region and its proximity to the farms. For this reason, the Government of the Republic presented a Development Plan for the Port of Manzanillo that proposes an investment of US$100 million, financed by the Inter-American Development Bank (IDB).

The objective of the plan is to improve road access to the new project, strengthen port management and implement environmental and social management programs.

Another project that bets on the development of Pepillo Salcedo is the creation of an infrastructure for the installation of 800 megawatts in Manzanillo.

According to the Government, the project will include two 400 MW plants and a natural gas unloading, storage and distribution terminal. This will create some 4,000 jobs during the peak construction phases, and thousands of permanent jobs upon completion.

It has the largest mangrove area in the Dominican Republic, with an area of 81 km2 that extends from the mouth of the Yaque del Norte River (the longest in the country) to the municipality of Pepillo Salcedo.

Here there are red, black, white and button mangroves, making it an ample habitat for marine species and birds.

This destination has a great environmental richness and is a beautiful scenery for the observation of migratory birds, flora and fauna. 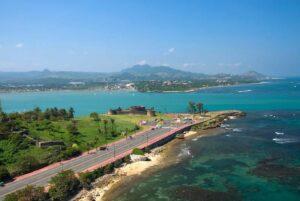 Both in the Saladilla Lagoon and in the Estero Balsa National Park there is an ample refuge for wildlife, in addition to the best conditions for kayaking and boating.

Mouth of the Masacre River

The Masacre River, also known as the Dajabón River, is an important destination for Dominicans.

This beautiful and historic place divides the island of Hispaniola into two countries: the Dominican Republic and the Republic of Haiti.

At Pepillo Salcedo, at the mouth of the river, is the first border landmark.

In the Bay of Manzanillo is the beautiful beach of crystalline waters Los Coquitos.

This northern beauty is ideal to enjoy with the family. In addition, it is located near the Port of Manzanillo, making it a scenario with great potential for tourism.