Puerto Plata is heading for a promising high season; they are working on awareness, security, ornamentation and road organization workshops.

The meeting was held in the Great Hall of Ocean World Adventure Park.

As part of the celebration of World Tourism Day, the Puerto Plata Destination Tourism Cluster (CTDPP) and the Mayor’s Office of the municipality of San Felipe de Puerto Plata held a public-private work meeting with a broad representation of competent authorities of the sector, to follow up on the issues of organization of the city, previously identified in view of the upcoming high tourism season in which more than 300 cruise ships are expected.

It was explained that, in October, the Cluster, together with the Mayor’s Office and the National Institute of Technical Professional Training (INFOTEP), will carry out an awareness program, which will consist of a series of training sessions to train the residents of the sectors with the greatest impact on the tourist activity; and also actions to train community managers to be multipliers of the message and to be able to give continuity to the mission.

In terms of road organization, an immediate review of the existing urban planning plan was proposed, in order to define actions to be implemented in the short term, which will allow for effective viability in the busiest areas. In the same vein, in view of the need for a larger number of Politur and Dirección General de Seguridad de Tránsito y Transporte Terrestre (DIGESETT) agents, those present pledged to seek joint solutions to support the aforementioned institutions in order to make efficient use of resources and guarantee security and order. 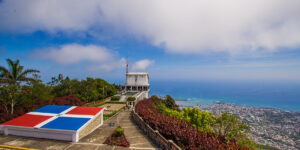 Regarding organization, ornamentation and signaling, the City Council will continue with the works already started in terms of cleaning and cleaning up of some main roads and it was also informed that a day of spaying and neutering was approved in the Chapter House to control the presence of canines in the historical center, which will take place in October. The private sector expressed its willingness to collaborate with the signage, for which a proposal will be prepared for local businessmen to sponsor the placement of informative signs in the city.

This work session was positively valued by all the participants, since it has allowed to reinforce the intentions of development of the destination shared by both the public and private sectors with incidence in the tourism value chain. They agreed that on Wednesday, October 5, they will meet again to report on the progress made up to that date.

The meeting was held in the Great Hall of Ocean World Adventure Park and was headed by Birgitt Heinsen, president of the Tourism Cluster, and Mayor Diomede García; it was coordinated by Ambra Attus, executive director of the Cluster.