With the aim of promoting the Dominican Republic as an attractive destination and boosting the local economy, Ron Barceló brought more than a thousand tourists to the country for Desalia, the most important electronic music festival in the Caribbean.

Attendees at this iconic event, which took place on the paradisiacal beaches of Punta Cana, enjoyed the participation of more than 25 international and local artists for nine nights, with their stay fully covered by the brand.

Among the enthusiastic public that attended the event were journalists, celebrities and influencers of great prestige from different parts of the world.

The event served to demonstrate the warmth of the Dominican people and to perfectly combine the ultra-premium experience offered throughout the event with the exquisite flavors of Barceló rums.

“Celebrating the fifteenth edition of the event in the Dominican Republic shows that the country remains a reference destination worldwide and that Ron Barceló continues to be for tourists, one of the brands that best represents the values of our country and quality products,” said Chiara Pennacchio, Global Marketing Director of Ron Barceló.

The executive highlighted that Ron Barceló is proud to promote the Dominican Republic in the more than 80 countries where the brand has a presence; “connecting the best of Dominican tradition and culture with the world and demonstrating our commitment to the future and progress of the country”. 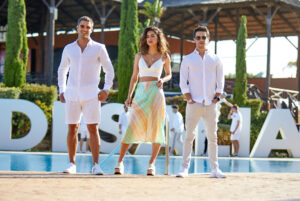 This version of the festival was a unique experience

This version of the festival was a unique experience, being one of the longest running editions in its history. The festival had nine days of music, sun, beach and theme parties in different locations in Punta Cana.

Desalia was held in the country in venues that brought together more than 8,000 people from dozens of countries, which contributed to the generation of substantial foreign exchange and the creation of development opportunities for the country.

In its fifteenth edition, Desalia had the biggest musical line-up to date, with the participation of renowned artists such as Quintino, DJ Nano and BJones, and the dembow of the Dominican Chimbala.

Tourism is one of the sectors with the greatest impact on the country’s growth. According to the study: “Dominican Tourism: a decade of contributions”, for every dollar spent by tourists, 2.4 additional dollars are generated, which demonstrates its multiplying effect. Official figures place the contribution of this industry at 22% of the Gross Domestic Product (GDP) if the direct and indirect impact is added together.

Ron Barceló, with a history dating back to 1929, is positioned as the Dominican brand. It is also the most exported dark rum in the world in its category.

In the country, Barceló is synonymous with operational quality and is recognized for its positive environmental and socioeconomic impact. This is evidenced by its accreditation as the first rum in the world to be certified Carbon Neutral, which means that year after year it quantifies, reduces and offsets greenhouse gas emissions from the life cycle of its products.