The plane, a BAe Jetstream 32 aircraft of the Air Century airline with capacity for 19 passengers, left Higüero at 9:38 a.m. and landed in Cabo Rojo at 10:13 a.m., to the applause of the local authorities present and representatives of the media covering the incidents of this first internal flight to this locality.

In an emotional moment, the plane stopped on the runway and was covered by an arch of water from two trucks of the Pedernales Fire Department, this being the traditional greeting given to the aircraft, as a gesture of welcome to the visitors and blessing of the new flight.

This first flight was led by the executive director of the General Directorate of Public-Private Partnerships (DGAPP), Sigmund Freund; the executive director of the Airport Department (DA), Victor Pichardo; representing the Dominican Air Force, the Inspector General, General Rafael Acosta Cena; the CEO of Rep-Air, Danilo Rosario and its administrative director, Carlos Jimenez. In addition, representatives of the Ministry of Tourism, the Ministry of Environment and the Pro-Pedernales Trust.

The guests of this first flight were received at the Cabo Rojo-Pedernales aerodrome by the local authorities headed by the governor, Altagracia Brea, the mayor of the province, Andrés Jiménez and other authorities. 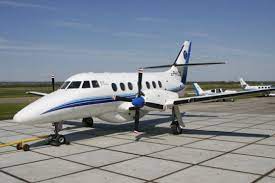 As part of the program of this inaugural flight, the guests toured the Cabo Rojo beach and pier, the land where the hotels that will operate the six hotel chains will be built and enjoyed a boat trip to Bahía de las Águilas.

It is a Dominican airline company, founded in 1992, with operations base at La Isabela-Dr. Joaquín Balaguer International Airport (JBQ), in what is known as El Higüero in Santo Domingo Norte, Dominican Republic.