The Dominican Republic’s low-cost airline, Arajet, began selling tickets this Monday, August 8, to travel from the Felipe Angeles International Airport (AIFA) in Mexico City, Cancun and Monterrey to the city of Santo Domingo in the Dominican Republic.

The first flight to AIFA is scheduled to arrive on September 15 with three weekly frequencies.
By the end of September, the airline will start operations to Cancun and Monterrey.

Arajet seeks to position itself as an option for the different profiles of Mexican travelers who wish to visit the Dominican Republic and the Caribbean.

Fares offered by the airline range from US$55 each way and US$149 round trip, taxes included.

In a press release, Víctor Pacheco, president of Arajet, affirmed that the airline will mark the rebirth of Dominican aviation and will bring Mexican visitors closer to Caribbean destinations. 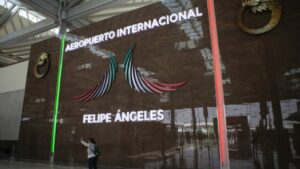 It is projected that, in a period of approximately five years, the airline will move more than 7 million passengers per year.

The arrival of these flights to Mexico is part of the airline’s strategy to make Las Americas International Airport in the Dominican Republic the new air hub for the Caribbean beginning in September.

“We are committed to diversifying tourism and expanding airspace at fair fares. We have achieved records despite the impact of the Russia-Ukraine war,” noted Tourism Minister David Collado.

In September, Arajet will also start operations in Barranquilla, Cali and Cartagena in Colombia; Quito and Guayaquil in Ecuador; Lima in Peru; Guatemala City in Guatemala; San Salvador in El Salvador; and St. Maarten, Aruba and Curacao in the Caribbean.

By October, the cities of Toronto and Montreal, Canada; Medellin and Bogota, Colombia; San Jose, Costa Rica; and Kingston, Jamaica will be added, establishing a network of 20 destinations in 12 countries in its first three months of operations.