On August 1, the SMCAA communicated the suspension of Dominican airline flights as of August 5, after the Dominican JAC revoked the operator permits (Resolution 172-2022) of Windward Island Airways (Winair), based in the Netherlands Antilles. “It constitutes a violation of the bilateral air transport agreement between St. Maarten and the Dominican Republic” stated Acting Minister of Tourism, Economic Affairs, Transport and Telecommunications (TEATT) Omar Ottley.

During the following hours there were meetings between both countries to solve this problem, since they are two of the most important markets in the region.

Currently two Dominican companies (Air Century and Sky High Aviation) and one from St. Maartin (Winair) fly between both island states, totaling an offer of 10 weekly operations in ATR 42, CRJ 200 and ERJ 145 aircraft. In 2019, 32,079 passengers were mobilized, being the third route with more traffic from the Dominican Republic. 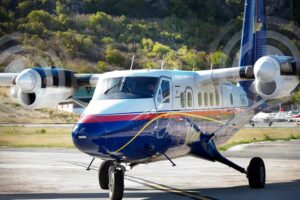 “The measure ordered by the St. Martin authority did not go into effect. In less than 24 hours they revoked the decision they had taken, so we guarantee that the air transport of passengers on the San Martin/Santo Domingo/San Martin route was not affected at any time”, informed the president of the JAC.

The JAC said that the two countries now have a mutual understanding, and it was agreed that WINAIR would continue its services to the Dominican Republic.

Airlines from the Dominican Republic can also fly to St. Maarten if their airlift agreement has not expired.

“It is important that we understand the need to protect our own, which I believe was the premise of the letter sent in the first instance. However, we must also recognize that sometimes our actions can hurt more than help, and, therefore, diplomacy is sometimes a better avenue of travel,” St. Maarten Transport Minister Ottley said.

Ottley said the same reciprocity applies to Dominican Republic airlines whose service agreements are still valid for St. Maarten or are requesting new service dates, such as Dominican low cost carrier Arajet which requested twice weekly flights to the Antilles.