Ministry of Tourism: “The vision of the Government and the Cabinet of Tourism is to support the open skies agreement with the United States”.

The Minister of Tourism, David Collado, informed that continuing to strengthen connectivity is the main challenge facing the country and that the vision of the Government and the Tourism Cabinet is to support the open skies agreement with the United States of North America.

“We will continue to promote the issue of connectivity with the United States and we strongly support the statements of the American Embassy of open skies,” said the Minister of Tourism.

This information was offered by Collado in the framework of the 34th edition of the Asonahores 2022 Trade Expo, where more than 176 companies from the entire commercial chain are participating. The event takes place from 19 to 21 October at Blue Mall Punta Cana and is dedicated to the United States, as it is the main source of tourists to Quisqueya.

The official highlighted that the ForwardKeys platform, which measures all airports and airlines in the world, has just published that the Dominican Republic is in the number one place in bookings for the last four-month period of the year in terms of tourist arrivals, with more 40%, compared to the same period in 2019.

“Our numbers are amazing and what we have to do is to continue to take care of tourism in the Dominican Republic, to continue to make an alliance with the private sector as it has been doing,” Collado said.

The official expressed that with this version of Expo Asonahores there is good expectation, because in it you can see everything that tourism represents, the entire commercial chain, from food, technology, construction, among others.

“Here is reflected, in this trade fair, the strength and importance that tourism has in the country’s economy, which represents 15% of the Gross Domestic Product (GDP), and that for this year we are averaging more than 8,200 million dollars in foreign exchange inflows; this makes the exchange rate stability is maintained and this clearly reflects that the tourism sector is fully recovered in the Dominican Republic,” he added. 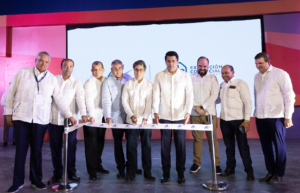 The president of ASONAHORES, Rafael Blanco Tejera, said: “The contribution and evolution of the tourism industry in the Dominican economy are part of the most important transformations of the productive apparatus, by presenting a multiplier effect between the different demands of goods and services that it generates”.

The Secretary General of the World Tourism Organization (UNWTO), Zurab Pololikashvili, congratulated Minister David Collado for the great work he is doing, while indicating that what is happening in the Dominican Republic are very dynamic and positive numbers due to the work that has been done. As a result of this, the country is on the board of directors and next year the UNWTO will receive, here, the most important Ministers of Tourism of the world.

“In the next 3 or 4 years the UNWTO will be talking about the Dominican Republic and three important things: Sustainable development, innovation and education, where many projects and investments will be made,” Pololikashvili pointed out.