Ulises Rodriguez warns of the challenge of adding value to products and services.

The general director of the Center for Industrial Development and Competitiveness, Ulises Rodriguez, warned this Friday that the Dominican Republic is facing a crucial stage in which it must give flourishing to innovation and competitiveness, or miss the opportunity to take off towards development.

At the inauguration of the II National Fair of Innovation and Entrepreneurship, Rodriguez explained that today we are leaders with world reference brands in tobacco, rum, beer, coffee, beauty products, tourism, medical devices, sports such as baseball, basketball, volleyball, and other products and services. We are also famous as a country of good, hardworking, decent and cheerful people.

“But from now on we must also be recognized as innovators and competitive entrepreneurs who work to add value and expand their industry, and give new impetus to the economic growth and social welfare of our people,” he stressed.

Rodriguez spoke at the opening of the Fair before hundreds of exhibitors, academics, students, businessmen, NGO representatives and government officials who came to the gardens of the Gran Teatro del Cibao.

Rodriguez summarized that 54 exhibitors are participating in the Second Fair, more than double the number of last year, 82 technological projects, 13 academies, 10 outstanding lecturers and 8 government entities.

He revealed that in the Fair there are exhibitors with 16 patents of invention, especially relevant if we take into account that these 16 represent almost half of the 40 that had been registered in the whole history of the country.

The projects on display today are technological proposals for the production of clean and renewable energy, automatic packaging, fodder production for animal feed, cocoa fermenter, thermoelectric bath, use of the sargasso that affects our coasts, among other technological solutions with the potential to automate and streamline the production processes of various manufacturing sectors, such as agribusiness, the chemical, textile and energy industries.

“As you will appreciate during your visit, our innovators are presenting practical solutions to common problems in our society,” he said.

These fairs are a tribute to our innovators and entrepreneurs, who mature the touch, expertise, and gallantry to solve problems. They are the basis of the process of updating, expansion, and diversification of our productive apparatus. 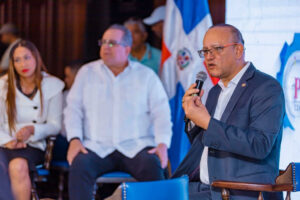 “The agreement of purposes and wills expressed here today shows that the government of President Luis Abinader has been strengthening the national public-private fabric.

“And from PROINDUSTRIA we are promoting this agreement to create, improve and facilitate the deployment of specialized production factors, which according to experts in the field is one of the keys to developing and maintaining competitive advantages,” he said.

He added that there is an alliance that for him is fundamental in the success of innovation and entrepreneurship, “and I am referring to the one that must take place between academia and industry, between theory and productive practice, without which there is no development of knowledge and technology applied to the creation of social capital”.

Young people must be empowered in innovation and entrepreneurship.

The official called on young people throughout the country to become empowered in entrepreneurship and innovation, since the future of the new country we are building lies in their ability to dare and determination to move forward.

Innovation is the need to fill a real space, to move from words to deeds, to understand that if we do not innovate now we will be condemned to lose market, foreign exchange, jobs and we will have to increase imports.

The call we have always made is not to innovate for the sake of innovating. As demonstrated by these projects that we at PROINDUSTRIA have captured, supported and are presenting today, innovation only adds value when it responds to the needs and aspirations of individuals, organizations and peoples.

He highlighted among the innovations presented the invention of a robotic rotating vertical parking to make the use of public spaces more efficient; a device that regulates energy consumption and can reduce it by up to 50%; and machinery that allows better processing of raw cocoa material and the production of more sophisticated products.

“And like those 3 cases you will see 67 more at the fair we are inaugurating. All of them are living examples that it is possible to transform weaknesses into strengths, and problems into competitive advantages,” he said.

He summarized that for Proindustria, innovation is the key to turn crises into opportunities, building stairs to move towards the integral development of our people.

He cited in this regard the example set by President Abinader when he took advantage of the Covid crisis to ensure effective vaccination coverage for the people and strengthen the public health system.

Also the way he has led the country by reactivating the economy, tourism and recovering jobs, even above pre-pandemic levels in the face of the global recession crisis.

“Have the full assurance and confidence that this son of Santiago, this public servant will continue to do the job with dedication and honesty, in a way that will make all of you proud!”, he concluded in a special message to the people of Santiago.