The General Directorate of Public-Private Partnerships, the Pro-Pedernales Trust and the Civil Aviation Board (JAC), announced this Tuesday the start of domestic flights from La Isabela Dr. Joaquín Balaguer International Airport to the Cabo Rojo aerodrome, as part of the actions for the development of the new tourist destination of Pedernales.

The executive director of the DGAPP, Sigmund Freund, during the launching ceremony held at the El Higüero airport, informed that as of November 1, the airline Air Century, in commercial alliance with the company REP-AIR, will start the operation of the new route after a bidding process, carried out under the mandate of the Pro-Pedernales Trust.

The official highlighted that it will start with two weekly flights, Mondays and Fridays, at a cost of US$ 50.00 per single trip with a duration of 35 minutes. Freund said that these domestic flights to Cabo Rojo will encourage domestic tourism and attract investments to this new destination that is being prepared so that Dominicans and foreigners can enjoy the beauty and goodness with which God endowed these lands of humble people, full of dreams and desire to be part of its growth and development.

“It is unquestionable that we are taking the first step in the dynamism of the arrival of tourists to Cabo Rojo, these are not words, they are facts that mark a path of change that has no turning back, thanks to the determination of this government and its leader and guide, President Luis Abinader,” said Freund during the announcement.

He also thanked the president of the Civil Aviation Board (JAC), the directors of the Dominican Civil Aviation Institute (IDAC), the Specialized Body of Airport Security and Civil Aviation (CESAC), as well as the Air Force, the Airport Department, the airline executives and the private sector, for their firm commitment to this project. 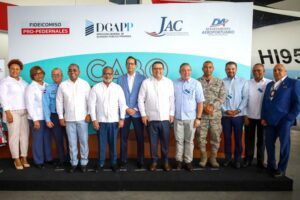 The president of the Civil Aviation Board, José E. Marte Piantini, said that this is a great step forward for Dominican civil aviation. He saluted the commitment of both the airline executives and the systematic work of the General Directorate of Public-Private Alliances and the Pro-Pedernales Trust to achieve the start of these flights.

In this sense, Marte explained that in the country domestic air transport (cabotage) is exclusively for national airlines and that the number of flights made under this modality is increasing, as a sign of the strengthening of operations in the country.

The administrative director of Air Century, Carlos Jiménez, expressed his satisfaction with the start of these flights, which he assured will connect Santo Domingo with the paradisiacal destination of Cabo Rojo, in the heart of the province of Pedernales.

“This flight, which will take us from the Primate City to the Deep South, will be operated twice a week, Mondays and Fridays, in a BAe Jetstream 32 aircraft with a capacity for 19 passengers and will take about 35 minutes,” explained the executive when he spoke.

He added that the tickets and services, both in Santo Domingo and Pedernales, will be provided by REP-AIR “our commercial ally” and pointed out that this initiative, which is in line with the state’s interest in increasing and diversifying tourism in the country, will serve as a bridge for the economic, social and structural development of this beautiful and remote area.

Present at the launching ceremony of the new air route were the Minister of Public Works and Communications (MOPC), Deligne Ascención; the general director of Customs, Eduardo Sanz Lovatón; the director of the Airport Department, Víctor Pichardo; the director of the IDAC, Héctor Porcella; the general commander of the Dominican Republic Air Force, Major General Carlos Febrillet; the director of CESAC, pilot Colonel Floreal Suárez; the senator of Pedernales, Dionis Sánchez, the governor, Altagracia Brea, and the deputies of the province, Edirda D’Oleo and Héctor Féliz.

Air Century is a Dominican airline company founded in 1992, based at La Isabela Dr. Joaquín Balaguer International Airport (JBQ), which is characterized by its punctuality standards and operational logistics mechanisms, important factors for its permanence for more than 28 years in the aviation market of the Dominican Republic.