President Luis Abinader inaugurated this Saturday in Montecristi the Sabaneta-Martín García-Guayubín highway, a heliport in Manzanillo, as part of the projects aimed at promoting the socioeconomic development of the province of Montecristi and delivered 86 apartments that will benefit an equal number of families.

The heliport, which will serve as an easy access road to this province, has an area of approximately 7,467.00 m2 and a construction area of 4,250 m2. It will have a landing plaza and two helicopter parking areas.

The President, who has been in Montecristi since Friday, specifically in the municipality of Pepillo Salcedo, participated on Saturday afternoon in the beginning of the works for the construction of the 414 MW Manzanillo Power Land Thermoelectric Generation Plant, through the generation of clean and sustainable energy.

The privately owned plant will be built with an investment of approximately US$135 million and includes the construction of a 345 KV electric transmission line to interconnect the Manzanillo Power Land plant with the National Interconnected Electric System (SENI).

The initiative includes the construction of a 7.2 kilometer gas pipeline that will carry the natural gas from the Port of Manzanillo to the generation plant.

In this respect, the Minister of Energy and Mines, Antonio Almonte, assured that these projects constitute historic events for the development of the Dominican electric system, since they create the capacity for the generation and delivery of energy in the Dominican Republic, sufficient to supply the annual peak demand and maintain a reserve of at least 20% to guarantee the stability of the electric service in the country. 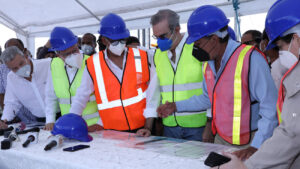 During his stay there, the governor visited an administrative building; led the delivery of certificates to beneficiaries of the pig recovery project and attended a lunch at the home of major league baseball player Nelson Cruz.

Friday
Regarding the Manzanillo Power Land thermoelectric plant, on Friday, the governor was present at the beginning of the construction works of the 420 MW natural gas energy project in Manzanillo, where the private sector will invest 1.75 billion dollars.

Minutes later, he attended the opening of the temporary exhibition “Montecristi: Light, Form and Color” at the inauguration of the Super 8 Manzanillo by Wyndham hotel where he promised to support the tourism sector of Monte Cristi.

Later, Luis Abinader together with the Minister of Public Works, Deligne Ascención led the inauguration ceremony of the asphalting of the streets of Montecristi, more than 25 kilometers with more than 152 cubic meters of asphalt applied.
It was also announced the construction of sidewalks and curbs for an investment of RD 50 million, in charge of the Ministry of Public Works.

In addition to those already mentioned, the head of state was accompanied by the ministers of the Presidency, Joel Santos, of Industry and Commerce, Víctor Bisonó and of Housing, Carlos Bonilla, among other officials.