President Luis Abinader inaugurated this Saturday in Manzanillo, the construction of three power plants and a gas terminal, with an investment of 2,470 million dollars to contribute 1,254 megawatts of energy to the system.

On Friday, the President began work on one of the two plants of 420 megawatts each and a gas terminal, with an investment of more than 1,750 million dollars, which were tendered by the Ministry of Energy and Mines.

The project also contemplates the construction of a 7.2 kilometers long gas pipeline that will carry the natural gas from the Port of Manzanillo to the generation plant.

On Saturday, the governor went to Pepillo Salcedo where he started the works for the construction of the Manzanillo Power Land thermoelectric generation plant, of 414 megawatts, with an approximate private investment of 585,500 dollars, developed by the company Energia 2000.

To interconnect the thermoelectric plant with the National Interconnected Electric System (SENI), the company Energía 2000, in coordination with Empresa de Transmisión Eléctrica Dominicana (ETED), is investing US$135 million in a 345 kilowatt transmission line.

This transmission line has a length of 127 kilometers, covering 304 towers that originate in Pepillo Salcedo, pass through Guayubín and culminate at the El Naranjo substation in Santiago.

Once completed, the projects will contribute to supply the annual peak demand of the Dominican Electric System and maintain a cold reserve of 20% to guarantee the stability of the energy service in the country.

Upon seeing the plans for the infrastructure improvement works at the Manzanillo terminal, the bidding for which will be awarded in April 2023, President Abinader assured that in five years Manzanillo will be unrecognizable.

The head of state affirmed that this generation project is a producing project for the country and mainly for the Northern region which will provide security in terms of fuel because it will have the first natural gas deposit.

He informed that the Dominican Petroleum Refinery (Refidomsa) has land in the area to build fuel deposits and this adds security for any eventual situation that may occur.

During his stay in Morro province, the head of state participated in the inauguration of the Super 8 Manzanillo by Wyndham hotel, where he assured that he will continue to support the tourism sector of Montecristi, for which he will facilitate investments that will develop and provide jobs.

The hotel, with 54 rooms, four levels, a large parking lot, swimming pool, restaurant and gym, among other areas, will provide jobs to 24 people directly and is part of a total of 18 infrastructures that the chain will build in different provinces of the country.

The President informed that, as part of the infrastructure improvements, cemeteries and parks will be refurbished and, by February and March, between 600 and 800 property titles will be delivered in the province.

He mentioned the support to the San Fernando seawall and the Salt Refinery, as well as the work on the reinforcement of the sanitary waters and the Montecristi bypass and the Guayubín-Copey highway. 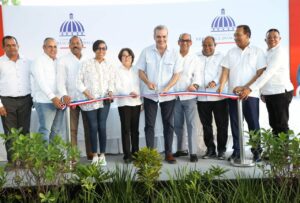 Later, the head of state inaugurated the Manzanillo Heliport, which will have a landing plaza and two helicopter parking lots as part of the projects aimed at promoting the socio-economic development of the province of Montecristi.

The terminal, which will serve as an easy access road to the province, has an area of approximately 7,467.00 m2 and a construction area of 4,250 m2 with available parking and green areas. It is located in a strategic area close to industrial projects.

Another of the president’s activities in the land where José Martí and Máximo Gómez signed the document to organize the Cuban war of independence was the opening of the Montecristi Museum, where the exhibition of 31 Dominican artists will be temporarily displayed under the name “Montecristi: Light, Form and Color”.

This museum, developed in a public-private partnership with the Manzanillo Energy consortium, will display a collection of more than 300 Taino artifacts salvaged throughout the Montecristi area and will tell the story of Dominican history and culture in a diverse way, expressed in art.

Later the governor participated in the act of “Music and Culture for Montecristi”, where there were musical presentations and the participation of the artist Fernando Villalona, who supported the firm position of President Luis Abinader in defense of the country and development of the Dominican border.

“Our border has to be a border and I know you are doing your best; even if others say otherwise, I believe you. Thank you for paying attention to the border, we have needed what you are doing for a long time”, said El Mayimbe.

The lives of dozens of families in Montecristi were transformed and dignified by President Luis Abinader with the delivery of 25 kilometers of asphalted streets and the announcement of the construction of sidewalks and curbs for an investment of 50 million pesos.

The Minister of Public Works, Deligne Ascención, informed that the 25 kilometers of asphalted streets include more than 152 cubic meters of asphalt applied and that the Palo Verde-La 70 road is almost finished, in addition to the inauguration of the Guayubín-El Pocito-La Mata de Santa Cruz-Copey road in a short time.

He also informed that the reconstruction of the road from Navarrete to Montecristi, an infrastructure whose purpose is to develop the connectivity of the provinces that make up the Northwest Line, has begun.

He also announced that work is currently underway on the awarding of the Navarrete Bypass, which, he said, will have an impact on the entire region and that the reconstruction of the Monte Cristi-Dajabón-Loma de Cabrera highway was delivered.

The head of state also led the inaugural ceremony of the Sabaneta-Martín García highway, with an extension of 19 kilometers and built with an investment of more than 1,121 million pesos.

From now on, and thanks to the road infrastructure, the trip from Santiago Rodríguez to Montecristi will be shortened by more than 45 minutes.

The head of state led the delivery of certificates to beneficiaries of the project for the Recovery of Livelihoods of Small Pig Producers of the Dominican Republic (RECUPERA+AgroRD), which had an investment of more than 237 million pesos.

The initiative has benefited 763 families that participated in the project and some 15,971 direct and indirect beneficiaries in the provinces of Montecristi, Dajabón, Santiago Rodríguez and Sánchez Ramírez.

In Sánchez Ramírez, a total of 216 families who wished to participate in this project worked on productive alternatives that included 80 cattle, 43 poultry (chickens and guineas), 83 goats, eight sheep, one rabbit and one farm.

Similarly, in Montecristi, Dajabón and Santiago Rodríguez, a total of 537 families participated in production alternatives of 89 cattle, 76 poultry, 246 sheep, 128 goats and eight modules, among other agro-productive alternatives.

At the ceremony, the President congratulated all those who participated in this project and assured them that they will do “the same or better” than when they were raising pigs. He assured that with the diversification of new products they will have a secure market for sale in the country and for export.

The President’s agenda this weekend included the delivery of 42 apartments of the Mi Vivienda project in Las Matas de Santa Cruz, Montecristi, which will benefit more than 200 people and will contribute to reduce the housing deficit in the country.

The housing project consists of seven three-story buildings with apartments with 3 bedrooms, bathroom, laundry area, living room, dining room, kitchen and balcony, 55% of which were developed by the current administration of the Ministry of Construction and Housing (MIVED).