This Saturday, President Luis Abinader led an event with pig farmers, to whom he formally delivered symbolically productive modules of the project for the Recovery of Livelihoods of Small Pig Producers of the Dominican Republic (RECUPERA+AgroRD), which had an investment of more than RD 237 million.

RECUPERA+AgroRD has benefited 763 families that participated in the project and some 15,971 direct and indirect beneficiaries in the provinces of Montecristi, Dajabón, Santiago Rodríguez and Sánchez Ramírez.

While speaking to those present, the President congratulated all those who participated in this project and assured them that they will do “the same or better” than when they were raising pigs.

He also assured that with the diversification of new products they will have a secure market for sale in the country and for export.

The executive president of the Dominican Agrarian Board (JAD), Osmar Benítez, explained that this project is a response from President Abinader for the benefit of small pig farmers who were impacted by the African Swine Fever.

“The main objective of the proposal is to explore productive alternatives for families affected by the disease who wish to change to another economic activity and to promote the associativity of small producers,” said Benitez.

The official thanked the Banco Agrícola and the regional directors of the Ministry of Agriculture, among other authorities of the province, for their support in this project.

In Sánchez Ramírez, a total of 216 families who wished to carry out this project worked on productive alternatives that include 80 cattle, 43 poultry, including chickens and guineas, 83 goats, 8 sheep, 1 rabbit and 1 farmer.

The Head of State also led the inauguration ceremony of the Sabaneta-Martín García highway, with an extension of 19 kilometers and built with an investment of more than RD 1,121 million.

The Minister of Public Works and Communications, Deligne Ascención, while pronouncing the central words of the act, emphasized that from now on the route between Santiago Rodríguez and Montecristi with this new road is shortened by more than 45 minutes. 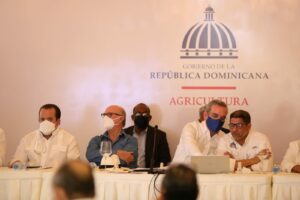 “This new road decreases the time and the long journey that traders and travelers had to make to be able to transit, through the road that leads to Dajabón, and from there take the Copey road to Montecristi,” he said.

He said that this plan has been called the route for the connectivity of the roads of the municipalities of Montecristi and the Northwest Line.

Ascención said that the total investment of this work is RD 1,121,908,266 and that the road connects the municipality of San Ignacio de Sabaneta, in the province of Santiago Rodríguez, with the tobacco and cattle raising community of Martín García, municipality of Guayubín, province of Montecristi.

He emphasized that this road has a direct impact on the rural communities of Machete, Guayubincito, Cayucal, Cabeza de Toro, La Breña, La Vuelta, Canoria, Los Pretiles, Merete, Monte Abajo, in the province of Montecristi, and directly on the municipality of Sabaneta and surrounding countryside, whose population exceeds 50,000 inhabitants. The works were in charge of the company Gil & Gil Constructores.

Continuing with his agenda in this province, the President delivered 42 apartments in Las Matas de Santa Cruz de Montecristi which will benefit more than 200 families and will reduce the housing deficit of the Dominicans.

The Minister of Housing and Buildings, Carlos Bonilla, said during the delivery that this initiative, “is part of the efforts to reduce the housing deficit of the most vulnerable Dominicans by using criteria focused on at-risk populations, such as single mothers, the elderly and people with disabilities, among others”.

The work was 55% developed by the current MIVED administration, which completed the construction of the project, including infrastructure services such as streets, parking lots, pedestrian sidewalks, green areas, drinking water, sanitary and storm sewage, overhead outdoor electrification, solid waste shelter, and perimeter fence.

The Head of State was accompanied by the Minister of Agriculture, Limber Cruz; the administrator of the Agricultural Bank, Fernando Durán; the director of INESPRE, Iván Hernández, and of the IAD, Guillermo García; the president of the Board of Directors of the JAD, José Comprés; the senator of Santiago Rodríguez, Antonio Marte; the provincial governors, Nelsy Cruz, of Montecristi; Rosalba Milagros Peña, of Dajabón, and Ivelis Almonte, of Santiago Rodríguez.

Also present were the Minister of the Presidency, Joel Santos; the director of INDHRI, Olmedo Caba; the senator of Montecristi, Ramón Antonio Pimentel; the deputy Rosendy Joel Polanco and the Major League Baseball player Nelson Cruz, among other authorities.