He says the possibility of establishing a direct flight between the Dominican Republic and Armenia is being discussed.

The Dominican Republic will open an office in Yerevan as a representation of its embassy in Moscow by the end of the year. The office will facilitate visa issuance procedures for Armenian citizens and there will be no need to send all documents to Moscow.

In an interview with ARMENPRESS, he addressed a number of issues related to bilateral ties, in particular the possibility of the launch of a direct flight, bilateral trade and tourism.

“We identified in Armenia a number of things we can do together. As a non-resident Ambassador you travel once or twice a year to the country to try to engage in some relations. But with Armenia we have identified more than normal things we can do. We, for example, realize that many Armenians were traveling to the Dominican Republic on vacation through flights from Moscow. And once these flights stopped in Moscow, Armenians are now very limited in my country. So we are trying to get a direct flight from the Dominican Republic to Armenia. We are also considering the possibility of that flight connecting with a flight to Los Angeles so that the Armenian Diaspora in Los Angeles can have the opportunity to come to Armenia through the Caribbean or Armenians in the US can meet with Armenians in Armenia in the Caribbean. on vacation Then we realize that we as a country have direct flights from Canada, France, Brazil, Argentina and USA, the same places where most of the Armenian Diaspora lives. So, the Dominican Republic could be a bridge between the Diaspora and Armenia in the Caribbean,” the Ambassador said.

He added in that order that Armenia has an embassy in Brazil, in Argentina, but does not have one in the Caribbean.

Dannenberg Castellanos said that they are currently working on an agreement on civil aviation issues. Charter flights can start without this agreement, but as he says, they want to create the legal basis for this agreement to grow in the future.

Inauguration of the new office of the Embassy of the Dominican Republic in Yerevan.

“We are also looking now to have an office as a representation of our Embassy in Moscow. Although I am a non-resident Ambassador, I want to have a more permanent office here, to serve Armenian interests, to be able to help in commercial issues, that is usually a door to look at the future of a possible embassy in Armenia,” he said, indicating that very soon, maybe by the end of next month, they will have an office in Armenia so that people can get their visas in Armenia and not have to send their passports to Moscow. 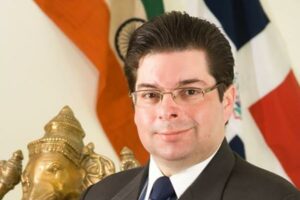 He stated that diplomatic relations between the two countries were established in 2007, the two states have cooperated multilaterally in many areas at the United Nations, but it has not been a very active relationship until ambassadors were appointed by both sides.

“This new government of my country, which two years ago, decided to diversify its diplomatic relations and make the ones that were already signed, to make it work. They have assigned an ambassador to Moscow, we have received their ambassador to Canada. And now we are looking at how to expand that relationship. The first step is usually the appointment of an ambassador, either resident or non-resident, then there are possibilities of having honorary consuls in each country. And then to start working directly with government officials in Armenia so that we can have the judicial and legal background to have more and more relationships,” he said.

“Now we have to create a legal framework so that this relationship can continue to work and bear positive fruit bilaterally. This will set the conditions to simply increase the level of our relations and hopefully in the future we will be able to have a resident embassy in Armenia,” he added.

The Dominican government has also identified the TUMO project that exists in Armenia. “It is a very interesting project that can be replicated in our region. We want to do this Armenian project in the Caribbean. It is also developing IT technology. We are also becoming an IT hub in the Caribbean. Maybe their companies and our companies can work together. I mean these are all areas we need to explore. TUMO could be the basis for many of these cooperations. We are very impressed with what you have done with TUMO and we want to replicate this program in the Caribbean. Through that we can open up many opportunities in the IT sector,” he said.

“We see that Armenia’s economy has become very dynamic. Our economy, the Caribbean, is also very dynamic. We have a lot of synergies and similarities between the two countries. We want Armenia to be our partner in the Caucasus and we want us to be Armenia’s partner in the Caribbean. We want to promote their wines, their cognacs, and through us extend them to Central America and the Caribbean, and we hope to do the same with our cigars, our rum, our coffee and our fruits. We have Dominican cigars that are very famous, very popular here. We have some Armenians who have brands of cigars made in the Dominican Republic. It goes very well with cognac, which is one of their most important products. The quality of your wine is incredible. I recently tasted some wines from Armenia, and I think there is a possibility to sell Armenian wines in the Dominican Republic. And as I told you we are part of the free trade agreement with Central America, with the Caribbean, and your wines can enter other markets through us, we are one of the largest markets in that area”, said the Ambassador.

Frank Hans Dannenberg Castellanos affirmed that his country is looking very closely at Armenia not only to establish tourist relations, but also to make Armenia a gateway for Dominican products. For example, they sell a lot of Dominican rum, cigars, but also avocados, mangoes, pineapples and many exotic fruits.

“We already met with some of the businessmen in Armenia, where they are looking to buy our products, which were very popular in Russia before the special military operation. But now they have very limited how they can get to Russia because there are no direct flights anymore. If we get this direct flight to Armenia, maybe our products can reach Armenia or other countries, even Georgia as well. So, we believe that Armenia is an important gateway to this region,” he said.

“We have been receiving Armenian tourists for a few years now. We want to increase the number of tourists, we want to facilitate the entry of tourists either by eliminating visas or reducing all the paperwork to make it easier for them,” he said.

“We are also Christians, so we have a lot of interests in Christian values and heritage, and Christian history in Armenia. And now, when many tourists who used to go to Russia cannot go because of the expenses, Armenia is a good opportunity. For Armenians, they have been going to the Dominican Republic for a while, the numbers are not very big because of the visa requirement. I think once we eliminate that, it would be easier for Armenians to go on vacation to the Caribbean, to enjoy our beaches, our mountains and our sports, hotels. And I also think that, as I said at the beginning, the Dominican Republic can become a connection point with the diaspora because we also have direct flights from Canada, the United States, Brazil and we can become an interesting connection point between the diaspora, they maybe cannot afford a trip to Armenia, and the Armenians, who do not have a visa or the possibility to fly to where their families are, can meet in the middle, can meet in the Dominican Republic to enjoy their vacations. They can enjoy our food, our sun and our beaches,” he said.