President Luis Abinader together with the Minister of Public Works, Deligne Ascención led the inauguration ceremony of the asphalting of the streets of Montecristi, more than 25 kilometers of asphalt layer with an investment of 50 million pesos.

The plan for the construction of sidewalks and curbs was also initiated, “which will lead us to solve this need, due to the expansion of the sectors of Montecristi”, benefiting tens of thousands of families, said the minister.

“Since the beginning of his term of office, the president has had his eye on the province of Montecristi and the entire northeastern region,” said Ascención.

Ascención indicated that in the area they are developing a set of works to achieve the connectivity of the entire northwest line, which includes the Navarrete bypass, which will be of great progress for the province and the region.

He said that it is necessary to connect the entire province, because in the near future, it will have a development that will generate enough jobs, and the local labor force currently available will not be enough to supply it.

At the beginning of 2023, the total reconstruction of the road that communicates Navarrete and Montecristi will begin, and the roads Guayubin- El Pocito, Las Matas de Santa Cruz – Cupey will be inaugurated, in this last intervention there are currently more than 15 kilometers asphalted of the 32 that the work includes, said Ascención. 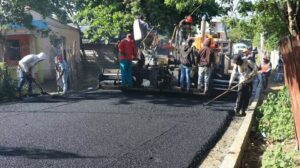 The minister indicated that this government has given the greatest response and support that previous government had given to this province. “From the Ministry of Public Works, as well as other state institutions, we are pursuing the president’s objective, which is to create the conditions for Montecristi to be overflowing with the most important development that this area has ever experienced,” he said.

The governor of Montecristi, Nelsy Cruz, thanked Minister Deligne Ascención for the asphalting of the streets, as well as other works, because they give back dignity to the people of Montecristi, she said.

Also Mrs. Carolina Rodríguez, thanked on behalf of her community, the president and the minister for the support they have given to her town, in the works carried out and those pending execution.