President Luis Abinader promised to make a contribution for the renovation of the Nautical Club of Montecristi, which groups the fishermen of the North zone and the country.

The president spoke with Commodore Cesar Hernandez to whom he assured that the government he presides will not lag behind so that the fishermen have a nice and comfortable clubhouse.

For 43 years the Nautical Club of Montecristi has carried out its activities in a ranchette, which is being renovated, for which they need the helping hand of the government.

President Abinader was in Manzanillo, where he took the opportunity to talk about tourism in the area, highlighting the importance of the Montecristi Yacht Club in attracting foreigners and nationals.

After concluding his speech, President Abinader met with the Commodore of the Nautical Club of Montecristi, the communicator Cesar Hernandez, the provincial governor Nelsi and Igor Rodriguez, administrative assistant of the National Palace.

After knowing how the reconstruction works are progressing, he averred to Hernández, that the government will make a significant contribution, for what he qualified as an important and necessary work for the development of Montecristi.

The Nautical Club is one of the attractions of San Fernando de Montecristi, which is complemented by the mangroves and the morro.

Hernandez was delighted by the announcement of President Abinader, who knows the model, with a beautiful and functional design, which will be made with funds from the club and an aid promised by President Luis Abinader during a visit over the weekend. 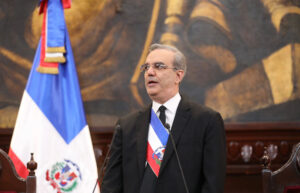 Commodore Hernandez said that with the passage of Fiona the ranchta suffered a lot, since the winds shook it, so they decided to finish tearing it down and make a new installation.

The Nautical Club of Montecristi is the main tourist attraction that has this coastal part of the North zone.

The ranchette was built in 1979 and was very cozy, but the passage of time was deteriorating, so it already deserves an adequate conditioning to these times.

The new building will have several elements allusive to the fishing, as well as halls for activity, gardening area and parking for visitors.

One of the traditions of the Montecristi Yacht Club is the celebration of the Blue Marlin fishing tournament, which attracts fishermen from all over the country and abroad.