After being previewed as a prototype and stealing a few hearts, the Nissan Ariya employs an aesthetic language that we think is totally successful. Bringing together the latest designs of the Nissan Micra and Nissan Juke and giving them a twist, the Ariya looks at the same time simple, emphatic and spectacular.

At the front the headlights are reduced to a row of LEDs integrated into the ends of the lips of a grille that goes from side to side. A grille that, by the way, is covered but simulates a three-dimensional grid. Small slanted openings on the sides and a two-height profile complete a powerful front end, very Japanese. 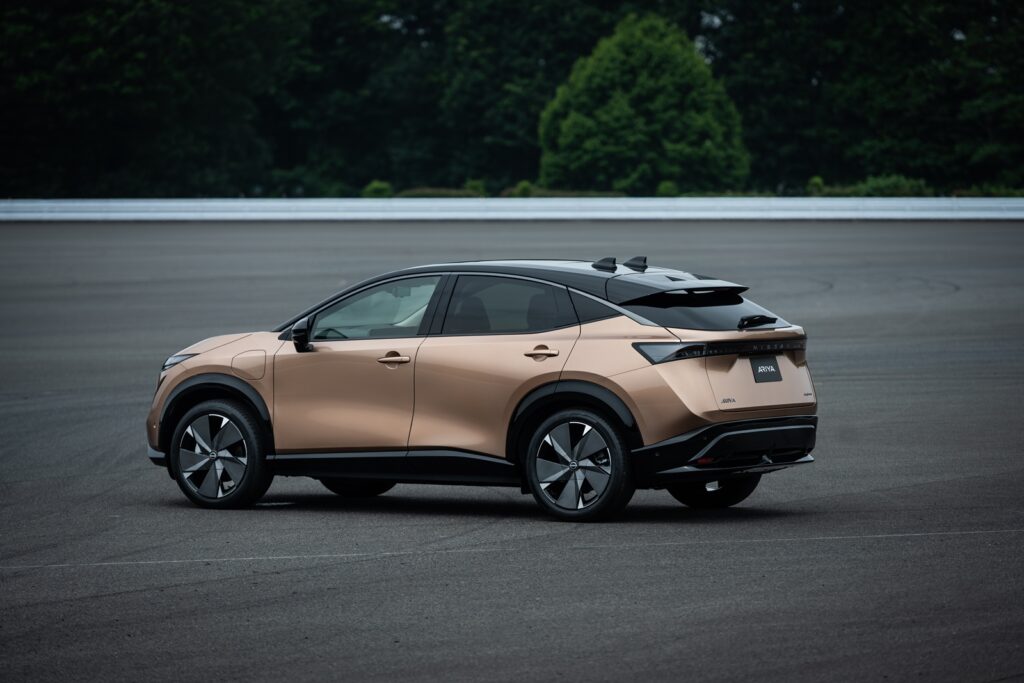 In profile the Ariya employs the now traditional style of coupe SUVs with a very marked descending roofline emphasized by the junction between the profile of the windows and the rear spoiler that really marks the end of the upper part. Otherwise, a high waistline well marked, large wheel arches and semi-faceted wheels up to 20 inches in option.

The rear for its part joins the current fashion of rear light clusters united by a horiozontal LED strip, and maintains the simplicity of the front with large panels with little shape. It would already be overloading with such a stretched window and the generous spoiler.

With respect to its dimensions, the Nissan Ariya seems to have set its sights directly on the Tesla Model Y, although it will be a little more compact. It measures 4.59 meters long by 1.85 wide and 1.66 high, making it slightly more compact than the Model Y: 160, 70 mm shorter and narrower but 40 mm taller. The weight of the Ariya ranges from 1.8 to 2.3 tons.

The futuristic styling also translates into an extremely modern interior but where angles are almost completely dispensed with unlike the exterior. The dashboard is all horizontal with a thin contrasting strip marking the central part of the dashboard.

Underneath are the semi-hidden buttons for the climate control. Above it is a large dual 12.3-inch screen, similar to the one used until now in Mercedes-Benz. Under the dashboard there is a small table on which to work, allowing a laptop to rest, and a horizontal, table-like center console.

Inside there will also be a huge amount of technology with voice recognition through natural commands, OTA updates and Intelligent Mobility driving assistance system. It will have compatibility with Android Auto, Apple CarPlay and Amanzon Alexa.

But beyond its futuristic boasts, the Nissan Ariya boasts a mechanical section based on Nissan LEAF technology but evolved. The experience gathered in the electric compact has allowed the development of an e-4ORCE AWC scheme with dual electric motor (one per axle) and a maximum power of , although it will also be available in single-engine configuration. In both cases, it will be operated exclusively with a single pedal, using the e-Pedal used on the latest LEAF.