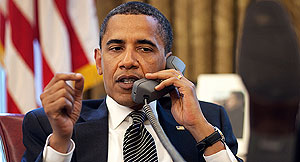 He congratulated Dominicans for their dedication to democracy.

Barack Obama, United States president on Monday called Dominican Republic president-elect Danilo Medina to congratulate him on his May 20 election victory and praised the Dominican people for their dedication to democracy.

The Leaders discussed the shared responsibility for enhancing citizen security, reducing illicit drug trafficking, and underscored the importance of economic growth in advancing the well-being of all Dominicans.

President Obama also highlighted the strong bonds of friendship between the American and Dominican people, noting that he looked forward to working with President-elect Medina on bilateral and regional issues of mutual interest.

The two leaders discussed the shared responsibility to ensure public safety, reduce drug trafficking and stress the importance of economic growth to advance the welfare of the Dominicans.

Medina, candidate of the ruling PLD party won the elections against his opponent of the opposition PRD party and former president, Hipolito Mejia, who has yet to acknowledge his defeat.