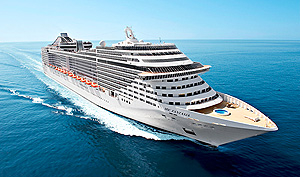 After several meetings with three major cruise lines that touch Dominican ports, Radhames Martinez Aponte, Deputy Minister of Tourism, said the country should feel satisfied with the achievements so far in the event organized by the Association of Cruise Florida and the Caribbean (FCCA).

Among the Association of Cruise Florida and the Caribbean members is Royal Caribbean, who agreed to increase the amount of passengers that will visit the country in 2012-2013.

During the meetings we held with Royal Caribbean, MSC and Norwegian have promised us that from the 2012-2013 season will increase the number of cruise ships or cruise the ability of playing the Dominican Republic, which would raise the number of tourists coming this way, said Martinez Aponte.

Michael Roman, vice president for Latin America and the Caribbean for Royal Caribbean, acknowledged the efforts being made by the Ministry of Tourism to further improve the conditions of ports and the changes they have experienced.