In the first 7 months of 2022, the Dominican Republic has received more than 4 million 182 thousand tourists, on its way to surpassing the 7 million mark of visitors by air.

Acting Director General of the Dominican Civil Aviation Institute (IDAC) Héctor Porcella congratulated President Luis Abinader and Tourism Minister David Collado, for creating the conditions for the Dominican Republic to have reached in the month of July the highest number of tourist arrivals in its entire history.

“On behalf of the entire family of the country’s aeronautical sector we also celebrate that civil aviation has been an important factor in this achievement by channeling the transport of 734 thousand visitors by air, setting a record in Dominican commercial aviation,” said Porcella. 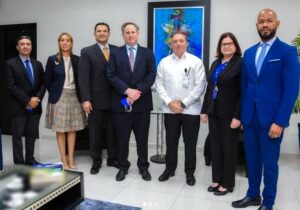 He said that both the IDAC and the Civil Aviation Board (JAC), the Airport Department and the Specialized Airport Security Corps, appreciate the opportunity to fully integrate into the successful strategy instituted by the Government through the Tourism Cabinet, to make the Dominican Republic the number one country in the recovery of tourism, after the pandemic.

Porcella made the statement after participating with Minister Collado and other authorities and businessmen of the sector in the presentation of the results of tourism in the past month of July.

Collado said that with the results of the first 7 months of 2022, it is projected to close the year surpassing for the first time in history the figure of more than 7 million tourists, and that this July 2022 arrival of non-resident visitors represents 10% more than July 2018, 24% above July 2019 and 30% above the same month of 2021.

“We did it again. We achieved an extraordinary month in tourist arrivals to the Dominican Republic,” Collado expressed when referring to the record figure reached in July in visitor arrivals in relation to the same month in previous years. “July 2022 becomes, together with December 2021, the only months in history in which we exceeded 700,000 tourists in one month,” he added.

The official indicated that, in addition to these 734 thousand visitors by air, 98,389 cruise ship passengers arrived in July and, cumulatively, the country has more than 4 million 182 thousand tourists so far this year.

He affirmed that the arrival of these tourists last month had a direct impact on the economy, since it represented 931 million dollars in foreign exchange earnings.

Minister Collado reiterated that this year will close with the arrival of more than 7 million tourists, “thus achieving the best tourism year in its history, thanks to the vision that has been implemented from the State by President Luis Abinader, as well as the cooperation of the private sector and all the Ministry’s collaborators”.

At the end of the presentation, Héctor Porcella reaffirmed the IDAC’s commitment to deepen its technical training and operational safety programs to respond efficiently to the challenges posed by the accelerated development of tourism for the Dominican Republic’s aeronautical industry.