Tourism, one of the largest industries in the world, contributes millions of dollars to the global economy. This sector contributes directly or indirectly to the 17 Sustainable Development Goals (SDGs), especially with the efficient use of oceans and marine resources. In developing countries, such as the Dominican Republic, it is the main engine of economic growth.

Mother Nature” is at the center of this growth. Its beautiful landscapes and seascapes attract hundreds of thousands of tourists like a magnet. According to the Ministry of Tourism (Mitur), the Dominican Republic received 3.5 million tourists in June 2022 alone. A “record” figure that evidences that tourists visiting this half-island seek to connect directly with nature and balance tranquility with adventure.

Diving tourism, a booming segment, offers that combination. Being several meters under the sea gives the sensation of connecting with a world not only full of challenges, but to some extent with much to discover, where the only thing you hear is your own breathing and where an hour is able to turn into just 10 minutes after getting lost in the magnificence of the coral reefs of almost the entire local coastal area.

The Dominican Republic has a privileged geographical location. Its seabed is full of coral reefs, large caves, extensive underwater valleys, shipwrecks and rich marine life, describes Mildred Minaya, a recreational diver, who has traversed the aquatic entrails in much of this half-island since 2010.

“It’s an adventure! It’s like doing yoga, but under the sea,” Minaya, an ecodiver (ecological conservationist), tells elDinero. “The country has great spots for diving,” she adds enthusiastically, recalling her first dive.

Rubén Torres and Omar Shamir Reynoso, prominent Dominican marine biologists, confirm this. “Good weather, warm crystalline waters and a whole year for diving, especially for tourists who live in cold climates or who only have warm periods a few months of the year,” Torres told elDinero.

“In the Dominican Republic we have a diving destination for everyone, all year round. It is a geographic area considered a biodiversity hotspot”.

Reynoso, adds that diving has an important potential in the Dominican Republic because of its elemental conditions when choosing locals and foreigners as a diving destination. “These scenarios are complemented by underwater cultural resources (shipwrecks) of important historical relevance and cavern systems for more experienced divers that delight with their stories, colors and composition,” he adds.

Torres is the founder and president of the Reef Check Dominican Republic foundation, through which he has been working since 2004 focused on the conservation of marine resources in the wake of the rapidly growing tourism industry.

“This country’s tourism depends on clean beaches, crystal clear waters and healthy coral reefs, which produce white sand on our beaches, protect the coast from erosion and are an important source of food,” says the president of Reef Check.

This statement is supported by official data. Currently, the quality of the beaches (43.3%) leads the way in attracting visitors, according to the Survey of Opinion, Attitude and Motivation of Non-Resident Foreigners in 2021, by the Central Bank. The second reason why tourists chose this country as their vacation destination was hospitality (19.9%), followed by climate (11.4%), among others.

Globally, the coastal and marine segment represents a significant proportion of the tourism industry and a vital component of the growing blue economy. By 2030, studies project that it will occupy the largest value-added segment of the ocean economy, accounting for 25%. Locally, statistics on this segment are scarce. However, its “ocean wealth” highlights the potential of this niche.

According to a study conducted by The Nature Conservancy (TNC), an international non-profit organization, the Dominican Republic is one of the five most visited nations in the Caribbean for coral reef activities.

Some 800,000 people a year participate in reef tourism. This activity generates more than US$1 billion a year for the country. More than US$865 million in reef-related sports, such as beach visits, and US$135 million in segments such as diving.

The report entitled “Tourism value associated with the coral reefs of the Dominican Republic” states that the Dominican Republic’s coral reefs add more than US$5.7 million annually per square kilometer. In addition, it is among the top 10% of the most valued reefs for tourism in the Caribbean. However, these competitive advantages have not yet been exploited on a large scale.

“Almost the entire country has areas suitable for diving, mostly associated with the main marine ecosystem, which is home to almost 25% of all marine life, despite occupying only 1% of the sea surface (coral reefs),” says Torres.

Given this reality, what are hotel companies and government authorities doing to protect coastal biodiversity? Experts consulted agree that an increasing number of hotel companies are taking voluntary actions, beyond legal regulations, in order to contribute to sustainable tourism.

From the preservation of corals, responsible use of plastic to policies for the realization of activities that do not damage natural resources, these are part of the social responsibility of the hotel companies that are part of the Association of Hotels and Tourism of the Dominican Republic (Asonahores), Andrés Marranzini Grullón, executive vice-president of the association, assures elDinero.

“The great majority of the beaches that are in front of hotels, members of Asonahores, have or carry the blue flag certification, which precisely certifies the actions of tourist exploitation within the framework of sustainability and the guarantee of preservation of natural resources”, expresses Marranzini Grullón.

Two specific cases are Bahía Príncipe Hotel & Resorts and Grupo Punta Cana, which have their own coral regeneration programs and others in conjunction with multilateral organizations that promote the conservation and preservation of natural resources.

“The Dominican Republic’s strategy in the marketing of the tourist destination includes diversification by activities. In other words, sports activities that attract enthusiasts such as diving or extreme sports are part of the country’s strategy”. – Andrés Marranzini Grullón, executive vice president of the Dominican Association of Hotels and Tourism (Asonahores). 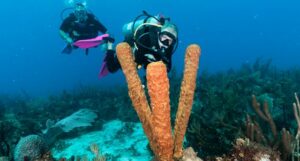 In this sense, Reynoso, of the National Authority of Maritime Affairs (Anamar) considers that the private sector has been implementing practices in favor of the environment as the main operator of diving spots in the country.

He also highlighted the hard work for the preservation of all the natural wealth that this tourist destination has to offer, carried out by entities such as the Foundation for the Development in Balance with the Environment (Fundema), Fundación Grupo Punta Cana, Reef Check, TNC, Fundación Cap Cana and the Dominican Reef Network.

In particular, Shamir Reynoso highlighted Anamar’s initiative in working with mesophotic reefs, one of the least known reefs in the country. At the public level, he said that most of the dive sites are within a zone of the National System of Protected Areas (Sinap), so “the State has made efforts to protect and conserve them, although more is still needed,” he said.

Torres, who dedicates his life to monitoring and protecting marine coastal resources, indicates that diving tourism, when done properly, serves as a tool for the conservation of marine areas.

Diving centers play an important role in recreational diving, since this activity requires diving in open water, but respecting no-decompression limits. The courses offered in this category also lay the groundwork for more advanced types of diving.

Regarding certified divers, in particular the center consulted by elDinero has signed some 800 certifications in this country in the last 24 years.

French-born diving instructor Denis Bourret, founder of Golden Arrow, stresses that the diving industry has always been a protector and ambassador of biodiversity. “Since I’ve been diving in 1988 I understood the importance of taking care of the environment and promoting that to my students and clients,” he says.

Bourret’s specialty is cave diving, which according to the report of the Fundación Espeleobuceo Hispaniola has counted 59 important basins that can be explored by tourists. Generally, these caves are known as wells, springs, lagoons, holes and pocimanes. These are scattered throughout the national geography.

The warm, crystalline and shallow waters of Quisqueya la Bella offer divers (beginners and professionals), spelunkers, hikers, marine observers and tourists in general a “360 view”, even at great depths. Some outstanding destinations are:

North of the country. It is famous for being a true spectacle of boats and submerged forests. Where: Montecristy.

It is the ideal place for snorkeling and diving to see the wonders of the underwater world. It is also ideal for night diving, a different and unforgettable experience. Where: Bayahibe.

Here lovers of diving tourism can explore more than 20 sculptures. For the advanced level, there is the Enriquillo RM-22 wreck. Where? Punta Cana.