It is like an incredible small municipality that has so much to see and enjoy. It is Cabrera, located in the province of Maria Trinidad Sanchez, which is characterized because all its attractions are very close to each other.

So much so, that many of the international film productions that are being made have made this destination fashionable.

This is due to the natural beauty of its surroundings, but also to the security, tranquility and privacy that Cabrera demonstrates to the number of actresses and actors who come here to film and, why not, to vacation.

But Cabrera is much more than that, as evidenced by the number of attractions that make it unique in this part of the country.

With more than 20 beaches, including Caletón beach, Arroyo Salado beach and Diamante beach, among others.

These beaches are the most sought after by local and international tourism. But there are also two natural monuments of fresh water that have made Cabrera in the taste of the visitor. 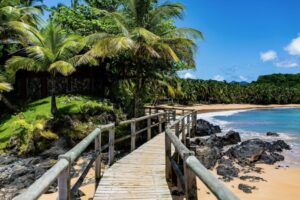 It is one of the most sought after places by tourists who come to Cabrera, as it has two lakes.

Considered one of the ideal attractions to practice speleological diving, the Dudú Lagoon has two bodies of water that are directly connected through subway tunnels.

It has a depth of about 32 meters and is surrounded by beautiful and fresh vegetation.

This natural monument is located in the municipality of Cabrera and is protected by a rainforest. To get there you must go down a local road, from which you will be surprised by its waterfall, which was declared a natural monument in 2009, by decree 571-09.

It is one of the few waterfalls in the country that allows visitors to enjoy its cool waters meters before it falls into the void.

Due to the growth that Cabrera has had as a municipality, housing complexes have been developed for all types of public, highlighting Cabrera Lodge, a boutique concept, which has three villas, with capacity for up to 11 people in each of them; private pool, air conditioning, large garden, night surveillance, pet friendly, among other facilities.

The property is located only 500 meters from the main entrance of the town of Cabrera, with easy access and close to the beaches of Caletón, Preciosa, Grande beach and Dudú lagoon.

In Cabrera, thanks to its extensive fauna and flora, you can make an itinerary to visit the most important ones.