At last year’s fair six hotel chains announced that they will invest in Pedernales. They also signed 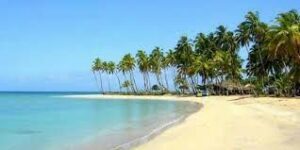 With its emerald green waters bathing beaches of extraordinary beauty, its magical mountains and the multiple options it offers to those who love ecological and adventure tourism, Miches will become the main protagonist of the Dominican offer at the International Tourism Fair (FITUR) 2023, which will take place in Madrid, Spain, from the 18th to the 22nd of this month.

As happened with Pedernales at Fitur 2022, when the Government presented that destination to foreign investors, the benefits of Miches will be exhibited in a special way during the fair, as announced last December by the Minister of Tourism, David Collado.

Collado also explained that the Dominican Republic is returning as a co-sponsor of Fitur, which will turn the spotlight on the Dominican stand, as has become a tradition.

A new feature is that the number of exhibitors has been increased, as Collado pointed out, reaching the maximum number allowed: 45 co-exhibitors.

This year the fair has Guatemala as a partner country, with the slogan “Guatemala. Amazing and unstoppable”.

While the Dominican Republic continues with its slogan “It has it all”. Therefore, as usual in the stand, visitors will find information about the country, representatives of financial institutions and companies in the industry and manifestations of culture, gastronomy and art, which makes the space an oasis for visitors: there they will find from a good cigar to a merengue to cheer the soul.

For this reason, in addition to the well-designed space -as is always the case-, last year the stand was awarded as the best at the fair.

The Dominican Republic’s participation in Fitur 2022 was special, the country was a partner and the delegation was headed by President Luis Abinader. This year it will be led by the vice president, Raquel Peña.
In 2022 the country achieved investment commitments for more than US$2 billion and 111,193 visitors attended the fair.

The Popular and Reservas banks, as well as the Civil Aviation Board (JAC), have already spoken of their expectations for the 2023 version of Fitur: while the banks seek to attract new investors for the tourism sector, the JAC wants to continue strengthening the country’s air connectivity and consolidate the operations of Dominican airlines.

Invitations are also starting to arrive: on Tuesday 17 Falcon’s Resort by Meliá and Katmandú Park will present their new “Resortainment” concept, while on Thursday the Piñero Group will offer all the details about its latest great bet in the country: Cayo Levantado Resort.