Some 168 beaches and resorts nationwide were shut down by the authorities, so that they are not used by vacationers during the Easter holiday. According to the Emergency Operations Center (COE), the preventive measure is part of the Easter Plan 2013, aimed at reducing the number of unfortunate events during Holy Week. 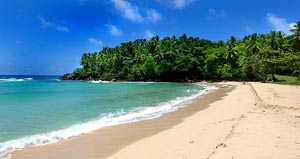 COE director Juan Manuel Mendez said the closure of the resorts and beaches was done because these places represent a danger for vacationers and residents in those areas.

Most closed beaches and resorts are located in Santo Domingo (24) and San Pedro de Macoris (23). But other provinces are included in the measure, such as Peravia, Santiago, Monte Plata, Monseñor Nouel, San Cristóbal, Barahona and Samaná.

The Emergency Operations Center also announced it will put the Easter Plan 2013 in motion with 32,082 people in the streets, roads and resorts, including brigades doctors, paramedics, military and police, specialists and other first responders to protect lives and prevent accidents.

There will also be 2,512 first aid stations installed at critical points on beaches, resorts, highways and boulevards nationwide.

COE director Juan Manuel Mendez announced the plan during a National Palace press conference on Thursday, accompanied by representatives from all the agencies that comprise the National Emergency Commission.

He said 168 swimming areas have been closed to the public as unsafe.

For his part Metropolitan Transit Authority director Juan Geronimo Brown said 2,000 of its agents will be patrolling the roads, with “carvaning” to reduce the speed of traffic, while bikers will have to wear helmets.

He also announced is the ban on trucks starting 2pm on Holy Thursday, except those which carry drugs, food and fuel.