Banco Popular’s participation is part of its initiatives to promote the global projection of the Dominican Republic’s creative and cultural talent, as well as the country’s economic potential.

Banco Popular Dominicano and the Embassy of the Dominican Republic in Mexico presented the book and multimedia platform “Dominicana Creativa. Talent in the Orange Economy” at the headquarters of the diplomatic mission in Mexico.

The formal presentation of the book was made by José Mármol, executive vice president of Corporate Communications, Reputation and Responsible Banking of Grupo Popular. The executive stressed that the purpose of this initiative is to make visible, both nationally and internationally, the economic impact of the creative and cultural industries. In addition, its dynamism in the generation of direct and indirect jobs and the need to promote the inventiveness and entrepreneurial talent of the new generations of Dominicans, both in the country and abroad.

He said that the Dominican government recognizes the enormous potential for sustainable development presented by the orange economy and is therefore taking actions, such as the National Strategy for the Export of Modern Services, to promote and support Dominican creatives by promoting the audiovisual industry, telecommunications, information technology, gastronomy, fashion, music and professional services, among others.

He added that, under this same line of work, during the last year and a half the Embassy of the Dominican Republic in Mexico has helped seven Dominican creative brands to enter the Mexican market, which is an unprecedented milestone for the presence of Dominican creative talent in Mexico. He pointed out that there has been a 28% increase in Dominican exports to Mexico in the first half of the year 2022. 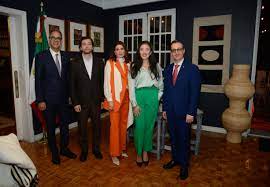 Gloria Lugo, Head of Operations of the IDB Office in Mexico, gave a presentation on the development opportunities for countries such as the Dominican Republic to position creativity as an integral economic and social element, and the impact of creative industries in LATAM and the Caribbean.

As part of the presentation, a panel based on the bank’s publication was held, with the participation of Dominican creatives living in Mexico. Actresses María del Mar Bonelly and Katherine Fuentes, visual artist José Francisco Báez Ferreira. The event was moderated by Esteban Martínez-Murga, vice-president of the Corporate Communication and Reputation Area, and was also attended by singer-songwriter Giorgio Siladi and editor, producer and theater director Benny Ferreira.

The exchange of ideas examined the barriers that prevent or hinder Dominican artists from reaching higher levels of international projection. They also discussed aspects that the Dominican Republic can learn from the development of the performing arts in Mexico, among other topics of practical interest.

The event included a musical showcase by Diomary La Mala and Giorgio Siladi, followed by a tour of the exhibition An Island on Another Map. This included works of art by Dominican artists living in Mexico, as well as an exhibition of Dominican creative brands in the Mexican market: Laura Tosato, Mónica Varela, Burnna, Jenny Polanco, Ká Dipuglia, and LeBlancStudios. The toast was sponsored by Ron Brugal.

Samples from the exhibition Una Isla en Otro Mapa (An Island on Another Map), which includes artwork by Dominican artists living in Mexico.

The development of these projects is part of the public-private alliance between Banco Popular Dominicano, the Ministry of Industry, Commerce and Mipymes, the Ministry of Culture and INTEC to promote the orange economy and internationalize the country’s creative export offer. The web portal www.economianaranja.com.do contains these and other tools of each entity.