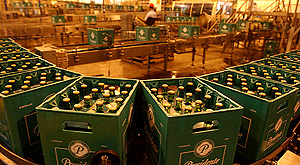 The Dominican National Brewery (CND) started the production of Cerveza Presidente in September on the island of St. Vincent, as part of its expansion strategy in the region. The production of the product is being done by the Saint Vincent Brewery, the local beer company.

The goal is the regional positioning of Presidente as the « Real taste of the Caribbean » , both in the islands where we already have a presence as well as inside the Caricom, a market made up of 15 countries, where they well 2.3 million hectoliters of beer, said Leon. (A hectoliter is 26.4 gallons).

He said that this initiative gives us a lot of satisfaction, since the CND is strengthening its expansion as a producer in the region of the Caribbean, setting a milestone in the history of our company and of the Dominican economy, he noted.

He referred to the fact that in this first phase, the Presidente production is distributed to eight of the 15 islands of Caricom. These are Dominica, Antigua, Trinidad and Tobago, Jamaica, Surinam, Guyana, Barbados and Saint Vincent. All told, the eight islands make up 70% of the Caricom beer market.

In the same way, these are added to the other international markets where Presidente is already has a presence, such as the United States and 13 other islands in the Caribbean.
With this initiative the CND increases its expansion as a regional producer, strengthens its presence in the Caribbean and consolidates itself at the same time as one of the biggest production companies and exporter in the region.

Pointing to the positioning of Presidente in the Caribbean, we are carrying out a wide program of imaging in publicity, both outdoors, by electronic media, television, the press and radio, stressing the exceptional taste of our brand and the qualities that define it as the one beer that is best to enjoy, he said.

In a similar way we emphasize the Dominican origin of Presidente, with the idea of projecting the good name of our company and with it, the quality of Dominican production » added Leon. The production of Presidente in Saint Vincent is exclusively for its distribution in these new markets.