During their visit to the historic center, the President and the Minister of Tourism launched the Program to Support Micro and Small Businesses and the Turizoneando program.

President Luis Abinader and the Minister of Tourism, David Collado, completed a busy agenda this Monday in the Colonial City, where they started the rehabilitation works of the streets prioritized in that destination, launched the Program of Support to Micro and Small Businesses (PAM) and the “Turizoneando” program.

In the long program of activities this Monday in the Colonial City, President Abinader and Minister Collado formally kicked off the rehabilitation works of the priority streets in the Colonial City, as part of the works included in the Integral Program for the Tourist and Urban Development of the Colonial City of Santo Domingo (PIDTUCCSD), which will have an investment of almost 5 billion pesos and will initially cover 11 streets, with the intervention of their pavements and sidewalks, burying of cables, replacement of drinking water, among other rehabilitation works.

Prior to this activity, both headed the launching of the “Turizoneando” program, during an event held in the historic Parque Colón.

The President and the Minister of Tourism also launched the Program to Support Micro and Small Businesses (PAM), in order to promote the development and improvement of the supply of goods and services in the Colonial City, to contribute to the growth of tourism and local commerce, optimizing opportunities for micro and small businesses (MyPES).

As part of the support received by the MyPES that are selected in this call of the PAM, is the accompaniment, along with experts, to carry out diagnoses and develop action plans; training and technical assistance in tourism, business and related areas, as well as assistance in the physical adequacy of commercial premises, according to various criteria, among other important benefits.

During the various activities, President Abinader reiterated his commitment to the Colonial City, the main historical, tourist and cultural epicenter of the Dominican Republic.

In his speech, Minister Collado recalled that since he was mayor of the National District he has given his full support to the works being developed in the Colonial City, “which has been part of my life”.

“It is of high national and social interest, to make our Colonial City a model in our country and in the region, in the tourist and cultural aspect, of which its residents and all Dominicans feel proud and for tourists it will be an unforgettable experience.” 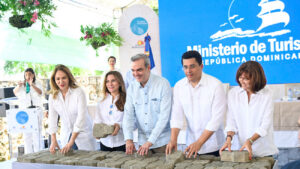 He reiterated that “one of the main reasons why we are promoting these projects is to strengthen tourism in the Colonial City, through a competitive offer, so that the commerce and citizens of this historic center perceive the benefits derived from the increase in tourist activity”.

The PIDTUCCSD is executed by the Ministry of Tourism (MITUR), through the Program Coordinating Unit (UCP), and in coordination with the Ministry of Culture (MINC) and the Mayor’s Office of the National District (ADN), with the purpose of revitalizing the Colonial City in its urban, economic and cultural tourism aspects.

President Abinader and Minister Collado were accompanied by the Minister of Culture, Milagros Germán; the Mayor of the National District, Carolina Mejía; the IDB Group’s representative in the country, Katharina Falkner-Olmedo, and the general coordinator of the UCP, Amín Abel Santos.

The Program is executed within the framework of a US$90 million loan contract signed between the Dominican State and the Inter-American Development Bank (IDB), whose representative, Falkner-Olmedo, ratified her support to all initiatives that promote social development, as is the case of Ciudad Colonial.