The Embassy’s Counselor for Commercial Affairs met with a delegation from Alto Aragon at the Chamber of Commerce. In 2021, the province exported to the Caribbean country for more than 800,000 euros.

Representatives of several Alto Aragonese companies have known this Thursday in the Chamber of Commerce and Industry of Huesca the market opportunities offered by the Dominican Republic, in a day in which the counselor for Commercial Affairs of the embassy of the Caribbean country, José Manuel Vargas, has shelled out the six reasons why it has emerged as the main investment destination in Central America and the Caribbean. In 2021, the province of Huesca made exports to this country for a value of more than 800,000 euros.

He pointed out that the Dominican Republic is well known for its wide range of tourist attractions -sun and beach, but also fishing, golf, cruises, aquatic and even medical tourism-, although the minister drew attention to other aspects “because it is also a regional hub for manufacturing and logistics services”. 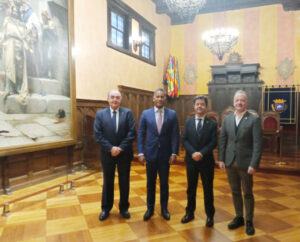 There are six strong points that are generating investment attraction. The first is economic, social and political stability. Next, the solid legal framework and incentives to encourage foreign investment. In this field, the 79 free trade zones where leading international brand-name manufacturers are located, twelve of them Spanish, stand out. The third point is the strategic geographical location, with eight international airports, twelve commercial seaports and five cruise ports, with fast connections to important markets such as the U.S. In addition, he emphasized the richness and variety of its natural resources -which is why it stands out in exports of products such as gold, cigars, rum, bananas, medical equipment, cocoa, jewelry, etc.- and, finally, its human and competitive talent.

The companies in attendance, all of them exporters, have assured that they are interested in expanding markets and, in some cases, were already trying to enter the Dominican Republic, for which the embassy’s counselor explained the existence of the Single Window for Investments as an instrument to channel investment requests and facilitate administrative procedures.

José Manuel Vargas has held a meeting with the president of the Chamber, Manuel Rodríguez, prior to the day with the companies, in which he has been introduced by the general secretary, Celia Elfau.

Meeting with the Mayor

In his visit to Huesca he has also been received by the mayor, Luis Felipe, to achieve a rapprochement with the companies of Huesca to promote and strengthen trade relations. The meeting was also attended by the President of the Chamber of Commerce and the Councilor for Institutional Relations, Ramón Lasaosa.