“For the first time in the history of commercial aviation in the Dominican Republic, November exceeds 912,000 passengers transported”.

This was revealed by the president of the Civil Aviation Board (JAC), José Marte Piantini, while reaffirming the agency’s commitment to continue expanding the connectivity of the national territory and promoting the leadership of the Dominican Republic in commercial aviation.

“The Dominican Republic, from January through November 2022, has registered a total of 14,019,895 passengers transported in arrivals and departures through international terminals,” Marte Piantini said.

“During the month of November, 1,217,928 passengers were transported in 9,656 operations. We expect to close the year with an initial estimate of 15.5 million passengers transported,” said the president of the CAB.

This was informed by the public servant after the conclusion of the plenary session this Wednesday, where the members heard the request for the extension of the Special Permit to the national airline Air Century on the Santo Domingo/Havana, Santo Domingo/Santiago, Santo Domingo/Miami and Punta Cana/Miami routes, to extend the operation on these routes until June 30, 2023. 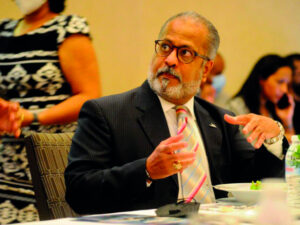 Air Century will operate these routes in AIRBUS 321 aircraft, with a capacity of 220 passengers, with the purpose of operating 462 roundtrip flights from November 27, 2022 to June 30, 2023. It should be noted that during the period January-October 2022, this operator transported a total of 37,343 passengers in 2,232 inbound and outbound air operations.

The plenary also heard the request to amend the Operating Permit of the foreign airline Frontier Airlines to include the Atlanta/Santo Domingo/Atlanta route. “This is evidence of the advances in the integration of new commercial routes to the country’s air transportation,” explained the president of the agency.

According to data provided by the Air Transportation Department of the CAB from January 2021 to October 2022, Frontier mobilized 660,506 passengers in 4,695 inbound and outbound operations.

The start of flights of this operator is projected for May 21, 2023, in AIRBUS A320 Neo (32N) aircraft with a capacity of 186 seats, to carry a frequency of two operations, on Mondays and Fridays, through which it estimates to mobilize 10,237 passengers from May-December of next year.

Marte Piantini indicated that this route will provide a low-cost, non-stop option that will allow Dominicans to travel between Atlanta and Santo Domingo at more affordable prices.

Finally, the members of the plenary heard the request for approval of Code Share operations between Copa and Turkish Airlines. Through this agreement, Copa will act as the effective operator on the Panama/Santo Domingo/Panama and Panama/Punta Cana/Panama routes, while Turkish will be the market operator.