A surprising and friendly animal

The manatee is a marine mammal that lives in warm waters, its scientific name is “Trichechus manatus”. It is also known as sea cow. It travels in large flocks.
Description

It is between 3 and 4 meters and weighs between 200 and 300 kilograms. The forelimbs, in the form of fins, have five toes equipped with small deformed nails. The tail is flat. The skin is a very thick blue-gray. It has a distinctive upper lip. It is friendly, gentle and very tame.
The West Indian Manatee

The West Indian manatee (“Trichechus manatus manatus”, Linnaeus 1758) is the only species of Sirenia in the Caribbean. It is a large animal, friendly and peaceful living in sheltered coastal areas such as bays and mangrove swamps, and rivers.
Habitat

Manatees live in warm coastal waters and shallow estuaries (where rivers join the sea) and slow flowing rivers in some tropical regions of the world.

The West Indian manatee lives in warm coastal waters of the southern United States, Mexico, the Caribbean islands, Central America, and the countries of northeastern South America including Venezuela and northern Brazil.

The West Indian manatee and other species of manatees and dugongs, migrate to different areas for the winter and summer as the water temperature changes. They often follow the same routes that their parents and grandparents followed, and return to the same areas year after year. Manatees can travel up to 500 miles each season. For example, some West Indian manatees spend the winter in southern Florida and summer in Georgia.
Feeding 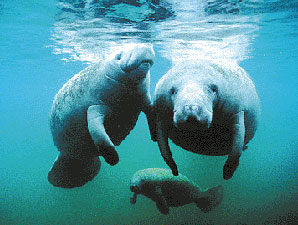 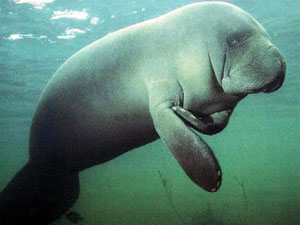 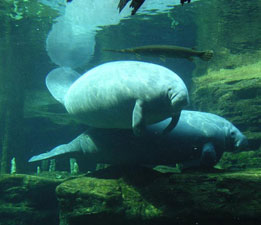 The mother manatee gives birth to one calf after 13 months of pregnancy and breast-feeds for two years, so it is only possible to breed about once every four years.

Female Manatees carry their babies in their arms and breast feed them in the water, similar to human mothers.
Endangered Species

The intense hunting for centuries of the West Indian manatee has put it on the brink of extinction. Nowadays, poaching continues, despite being protected by law, for meat and bones. The popular tradition says that manatee meat has seven flavors.

Manatee bones are used for crafts and medicinal purposes in traditional medicine.

There are less than 5,000 West Indian manatees (“Trichechos manatus”) in the Caribbean, Central America, and the Southern and Eastern coasts of North America and the North Coast of South America.

In the Dominican Republic, the population is disappearing, with less than 70 individuals, and a reported four deaths in the first three months of 2008 (source: National Aquarium).
Legend

Legend has it that in Santo Domingo, in the sixteenth century there was a chief who had a domesticated animal, which he called “Manat” that amazed people and carried whoever wished to cross the river on his back. It is assumed that the animal was a manatee.