DR present at the 26th edition of the International Tourism Fair of Latin America (FIT).

The Dominican Republic participated in the 26th edition of the International Tourism Fair of Latin America (FIT) 2022, which was held at the La Rural exhibition fairgrounds, autonomous city of Buenos Aires, where business meetings were held so that more South American tourists would visit Quisqueya.

During the days of the event, a work agenda was completed with airlines and tour operators selling the Dominican tourism product.

The Dominican stand had a space of 160 m2 in the International Sector, where 16 companies from the country’s tourism services chain, including hotels and incoming companies, participated and held business meetings.

In addition, several Argentine media outlets visited the stand, as did thousands of people attending the event in search of information on the Dominican Republic as a destination. 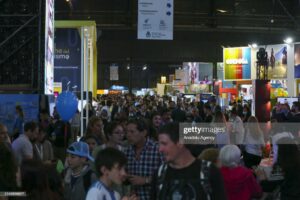 Within the framework of the event, other outstanding events took place, including the “FIT Visit Argentina Connect” business round that brought together 120 national and international tour operators.

There was also the FIT Tech space of the Travel Forum Latam, which provided talks and training for the industry on innovation, technology, sustainability, and global and local tourism issues.

Tourism (FAEVYT); Matías Lammens, Minister of Tourism and Sports of Argentina; Lucas Delfino, President of the Tourism Board of the City of Buenos Aires, among others.