David Collado reported that in November alone, the DR received 571,354 tourists, who generated more than US$532 million in foreign exchange.

Minister David Collado affirmed that Dominican tourism continues to reach “extraordinary” record figures by achieving the visit of almost 7.5 million people in the first eleven months of this year, generating, in addition, US$7.8 million in foreign exchange, in the same period according to estimates to be confirmed by the Central Bank at a later date.

In his now traditional monthly press conference to give the results of the sector’s performance, the official reported that last month was the best November in history as the country received 571,354 tourists by air, 109,489 tourists more than those who arrived in the same month of November 2019, representing an increase of 24 percent.

“In November we did it again, we reached record numbers in the visit of 571,354 tourists by air alone, which means an increase in arrivals of 24 percent compared to November 2019. It is a true success story month after month,” Collado highlighted.

“With the arrival of Dominicans residing outside the country we registered a growth of 20 percent in relation to November 2019 and with the visit of foreigners we exceeded 12 percent in growth,” said the Minister of Tourism. 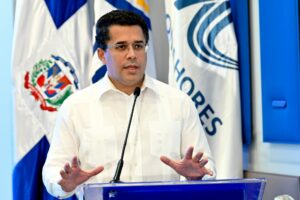 Collado also highlighted the growth that has been registered in the arrival of cruise passengers, with 195,270 visiting in November, compared to 111,128 in the same month of 2019.

“If we were to add the 571,354 tourists who arrived by air and the 195,270 who came via cruise ships, we are talking about the historic figure of 766,624 visitors in the month of January. If that is not a record, tell me what is,” asked the official at the press conference, which took place in the Grand Ballroom of the Ambassador Hotel.

Likewise, Collado highlighted that in the first eleven months of this year the Dominican Republic received 6,397,444 visitors by air, as well as another 1,085,606 excursionists, which represents the visit of 7,483,050 people in the January-November period.