From the Garifuna to the Tainos, the Nahuatl-Pipil and the Bribri, Central America and the Dominican Republic have more than 60 indigenous peoples, whose traditions, customs and cuisine are fundamental to the conservation of the region’s natural ecosystems.

Every August 9, the indigenous peoples and their importance for the development of humanity are celebrated, a date of great importance in Central America and the Dominican Republic, as they are territories with a great diversity of people. In the isthmus it is possible to find different ethnic and tribal groups that configure, to a great extent, the identity of each of the countries where they live, being, in addition, an element of study for many experts who have been able to observe fascinating ways of life and customs. A round trip allows us to get to know some of these communities and discover their origins and traditions.

The Tainos of the Dominican Republic

The Taino Arawak Indians, reputed to be brave and skilled, settled on the Hispaniola side of the island, now the Dominican Republic, long before Christopher Columbus and the Spaniards arrived there. They lived in different tribes, each subordinated to a chief called cacique, and used plants as medicine, were skilled farmers and had a highly developed talent for handicrafts. Today, their cave paintings and engravings can be seen in caves in Samaná, Bayahibe, San Cristóbal and Enriquillo. In addition, numerous objects from the Taino period are on display at the Museo del Hombre Dominicano in Santo Domingo and at the Museo Arqueológico Regional Altos de Chavón in La 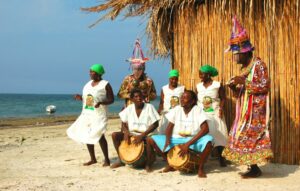 Visit the Bribri in Costa Rica

About eight native tribes are spread over 24 different territories in Costa Rica and speak up to six different languages; the Bribri people are perhaps the best known of them and live mainly in the forested lowlands of Talamanca, in the province of Limón. Translated from their tribal language, their name means brave, bold or energetic. Today they continue to make a living from agriculture and the cultivation and sale of bananas and cocoa, something that also plays an important role in their spiritual and healing rituals. The Asociación de Guías Turísticos Indígenas Bribris de Talamanca (AGITUBRIT) offers tours, with local guides, to learn first-hand about their way of life.

About 12% of Panamanians have indigenous origins or identify with an indigenous people, of the seven that still live in the country today: the Ngäbe, the Buglé, the Guna, the Emberá, the Wounaan, the Bribri and the Naso Tjërdi. Together, the Ngöbe and Buglé tribes total a population of about 200,000 individuals, forming the largest indigenous people sharing a common territory. Ngöbe-Buglé women play an important role in the tribe, as they are not only responsible for the household, but also for agriculture and handicrafts. One of the most typical handicraft products are the chácara bags, hand-woven with natural fibers and dyed with natural materials obtained in the forest.

The Garífuna, the diverse Afro-Caribbean people of Honduras

Although the Caribbean Garífuna people, descendants of Africans and Arawak Indians, also settled in Belize, Guatemala and Nicaragua, it is in Honduras where they have their largest population today. According to tradition, the Garifuna emerged in 1635 after the shipwreck of a slave ship from West Africa off St. Vincent. In their culture, African, French, British and Spanish influences merged into something very unique, which is still reflected in their language, Igñeri. Although there are Garífuna communities in many coastal territories of Honduras, Bajamar, Travesía and Puerto Cortés are places to get close to their traditions; from the rhythms of the punta with unique instruments to the guífiti, a drink made from herbs, roots, spices and aguardiente.

El Salvador has three characteristic ethnic groups: the Kakawiras, the Lencas and the Nahuatl-Pipil; the latter gave their name to areas such as Cuzcatlán. One of the greatest curiosities of this country is that it is very easy to find ethnic groups that keep their culture and language intact; for example, the use of the Nahuatl language is common in areas with an indigenous presence, especially in the west of the country. In Juayúa and Nahuizalco, two municipalities along the Ruta de las Flores, you can learn about the Nahuat Pipil culture, for example, by visiting the Pipil Nahuatl Memorial Museum, which gathers information on indigenous settlements, history and details of the 1932 massacre, an event that marked El Salvador.